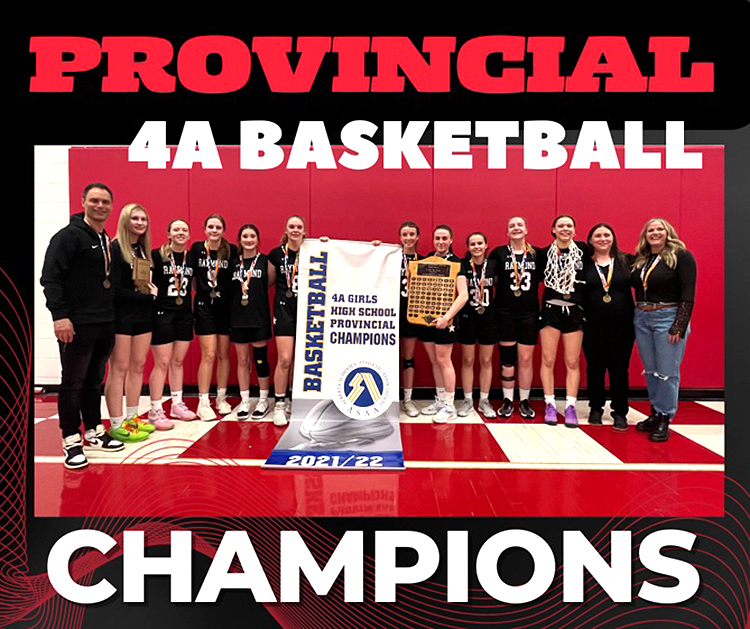 By Justin Seward
Lethbridge Herald
The 4A Alberta Schools Athletic Association (ASAA)Senior Girls Basketball Provincial Championship could not have been scripted any better Saturday Night at Raymond High School, as the host No. 1 seeded Comets hosted the second-seeded Magrath High School Pandas.
It was the Comets prevailing with an 80-75 nail-biting victory in front of an electric crowd full of school support for both sides of the long-time rivals.
“It feels so amazing,” said the Comets’ Aubrey Baines.
“We’ve worked so hard and for our whole lives. This was the end goal and we made it.”
Baines thought the team’s strength was never giving up.
“We got down at one point in the game but we never stopped pushing , we never stopped playing our game. We kept telling each other just play our game and we’ll come out with the ‘W’ and that’s all we need to know.”
Baines said she will remember everything from this ride.
“This team is my family and the coaches — they’re so amazing — and I don’t know what I’d do without them this year. I couldn’t ask for anything better.”
Delaney Gibb felt emotional after the victory.
“And to be able to have this moment is super special and it’s one that I’ll never forget,” she said.
She credits the defensive side of the Comets game a key to the win.
“We focused lots on just holding them to low points and focusing on some of their key players and just working hard getting 50-50 balls,” said Gibb.
Comets head coach Alan Gibb was so happy for the girls.
“They had an unbelievable season— undefeated here in Canada and one loss in the U.S. to a 6A team that could have won the 6A state championship,” he said.
“I’m just glad that I’m not the coach that ruined it for these girls. But I have to say Magrath, they did everything that they could to win a banner as well. I didn’t want to play Magrath in this final — this is the sixth time we’ve played them this year — and I don’t think you should have to beat a team six times to earn a banner and prove you’re the best team. But give credit to Magrath and to Brad Karren for putting a game plan together that really threw us for a loop and I’m just glad in the end our kids made the plays at the end of the game to win the game.”