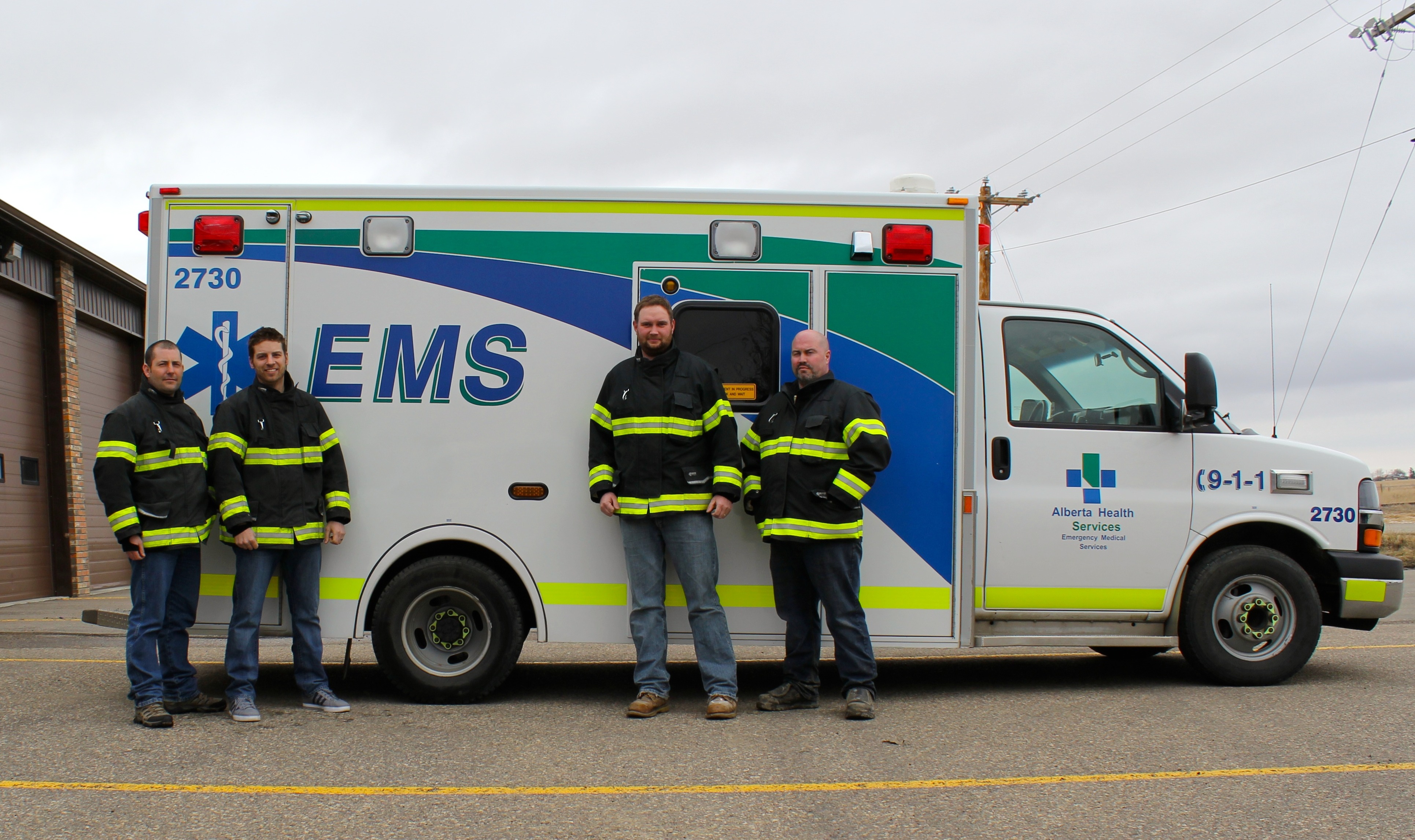 A new cooperative arrangement between Alberta Health Services (AHS) EMS and the Town of Raymond will result in an additional ambulance resource for residents of Raymond and area.
The added Basic Life Support (BLS) ambulance arrived at the Raymond Fire Station earlier this month where it will be stored.
“It will probably be late spring before we are up and running like we want to be, but in the mean time we still provide a first response ambulance,” said Raymond fire chief Doug Holt who is optimistic about the future.
This unit is in addition to the Advanced Life Support (ALS) ambulance already stationed in town and crewed by AHS Paramedics and EMTs.
The new BLS unit is staffed with AHS volunteers from Raymond and area with Emergency Medical Technicians (EMTs) and Emergency Medical Responder (EMR) level training. Two trained EMT volunteers (Christian Mora and Kyle Clifton) have already started and begun providing service.
AHS started training the new EMR volunteers (Cory Powelson, Lance Stewart and Brad Schneider) in January and expects them to complete their training by April or May of this year. The training costs are covered by AHS.
Holt went on to add that once the training is complete and the new BLS ambulance is put to work, the service level will only improve for Raymond and area residents.
The fully equipped BLS ambulance is owned by AHS and will be regularly serviced by them.
“It was a political process that the Mayor (George Bohne) initiated through the Health Minister and AHS. We just felt like we needed to have the ability to transport and fill in when the AHS ambulance is on call or out of town,” noted Holt. “We wanted the ability to fill in and cover the community 24 hours a day, seven days a week.”
The Town of Raymond and AHS identified the need and AHS worked with Raymond fire chief Doug Holt and the volunteer fire department members to find this cooperative solution, read an AHS press release.
This is not the first time Raymond has been home to a unique solution. Raymond is also home to two AHS non-ambulance transfer (NAT) vans. These vehicles transfer patients between hospitals when they do not require an ambulance level of care. This new level of transfer care allows ambulances to remain in the community to respond to emergency calls.
“It is a good relationship and it has come a long way. It is a very positive thing for the town.” Holt continued to say that the increased ambulance availability will help to reduce ambulance wait times, a concern of many Raymond residents.
Magrath and Cardston also have unique agreements with AHS to provide full ambulance coverage that works in their respective communities.