Funding for seniors’ housing in Raymond 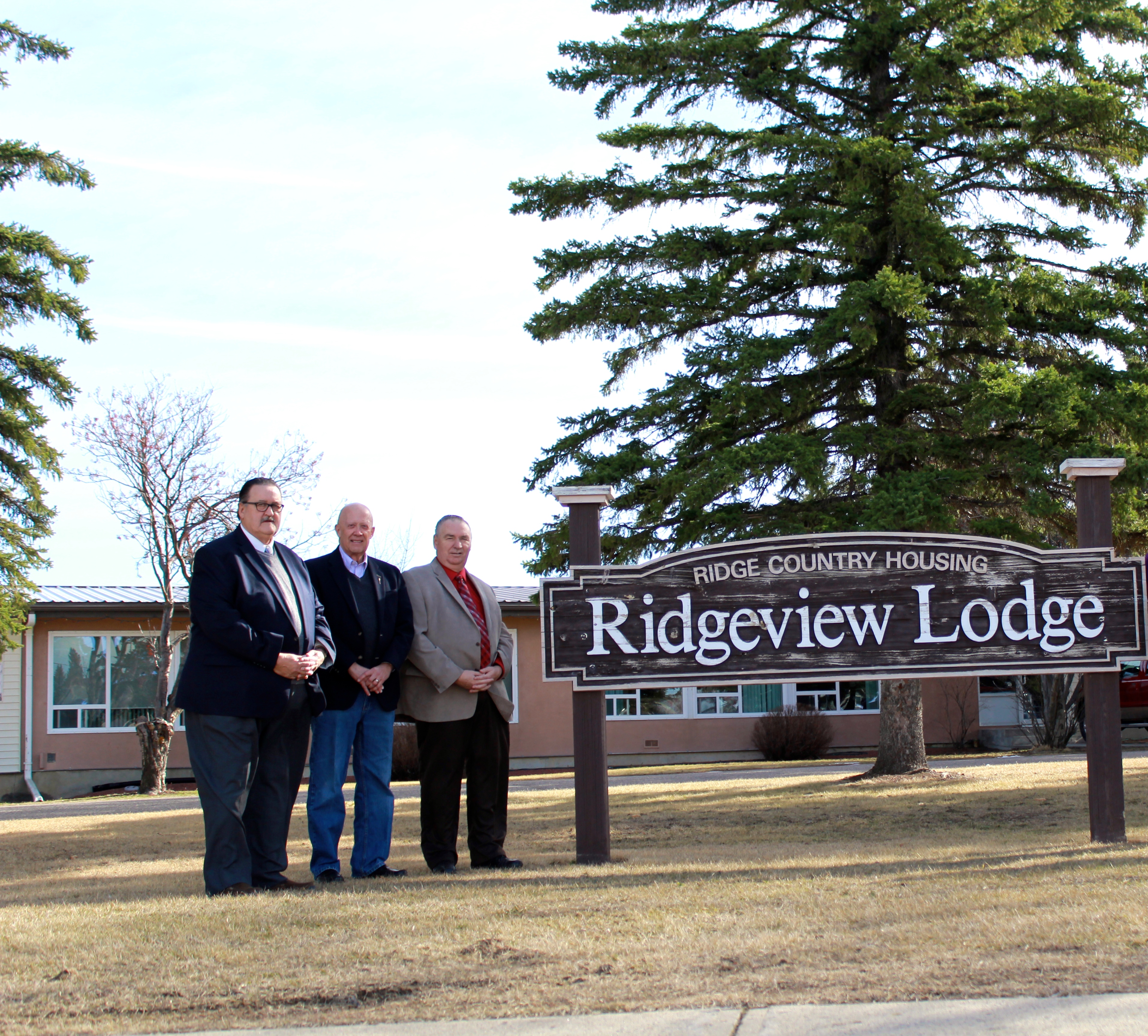 Alberta government officials gathered at the Ridgeview Lodge on Thursday in Raymond to announce $7.8 million in funding for the construction of a new low-income senior housing facility.
The residents, 75 per cent of whom are from Raymond, will soon have a new place to call home.
“This is a good, better, best scenario,” said George Bohne, vice-chairman of Ridge Country Housing and Mayor of Raymond. “The good thing has been announced today, we are glad to get a new lodge. A better day will be when we see the shovels in the ground working . . . And the best day will be when we move the seniors from this lodge to the new lodge.”
Funding will come from the Investment in Affordable Housing Agreement (IAH) 2014-2019, between the Governments of Canada and Alberta, said Lethbridge MP Jim Hillyer.
“Seniors have built their lives in these communities and they often have had to leave town when it’s time to go into senior housing and this announcement is great because it allows people to stay in the town that they grew up in.”
The government’s cash injection will fund 40 units for low-income seniors in the new 60-unit lodge, with the remaining money for the $9.4-million project to be contributed by the housing management body, Ridge Country Housing.
“We want to be able to stay in the communities that we helped create, don’t we?” said Cardston-Taber-Warner MLA Gary Bikman. “This is where we live, this is where we are comfortable. This is where our family and support group is.”
Bohne said the announcement has been 10 years in the making, as Ridge Country Housing and the Town of Raymond council campaigned the government.
“We have already completed some of the behind-the-scenes studies and prep work that would normally just be started at this time.”
The new facility is needed. The current Ridgeview Lodge, which was built in 1960, is outdated. The rooms are small at an average of 200 square feet, the basement foundation is crumbling and not all of the 33 units have their own full bathrooms, forcing residents to share communal tubs and showers.
“It will be nice to have more space,” said Ridgeview Lodge resident Lillian Baldry. “It is kind of hard when you move in and have to downsize and be separated from so many of your belongings.”
Baldry is one of 21 residents eagerly waiting and hoping they will still be around to move into the new facility.
The new facility will be fully modernized and wheelchair accessible. The single-room units will be at least 450 square feet, with larger options available for couples. Many of the rooms will also include a small kitchen with a microwave and mini fridge.
The facility will feature an open concept floor plan to provide common gathering areas for the residents and visitors. The rooms will also be equipped with Wi-Fi and satellite TV.
The medical community has expressed interest in having a room in the new lodge to use as an examining clinic office, said Bohne. That way the doctors could come to the seniors and have scheduled hours on site, rather than the seniors having to co-ordinate ways to get to a doctor off site.
After the new building is constructed, the existing facility will be torn down so the land can be repurposed, most likely as a parking lot.
The new lodge will be built immediately north of the existing facility located at 227 East 100 St.
Because of the size of the new facility, it will encroach onto part of the little league baseball diamond.
Bohne ensured residents that Raymond Council has planned and anticipated the announcement for some time now and has plans in place to replace and improve the diamond to better meet the needs of the baseball community in the process.
Ridge Country Housing hopes to be shovel ready by early summer, so the building can be framed and closed in by the fall, allowing construction crews to work through the winter.
In the future, Ridge Country Housing hopes to eventually build a “Campus of Care” around the Lodge, explained Bohne. This would include senior condominiums and other affordable housing options for seniors outside of the lodge itself.
“People can move into those facilities and then as their condition warrants it, they can graduate into the lodge.” Campus residents could take advantage of lodge meals if they wanted or participate in some of the lodge run social activities.