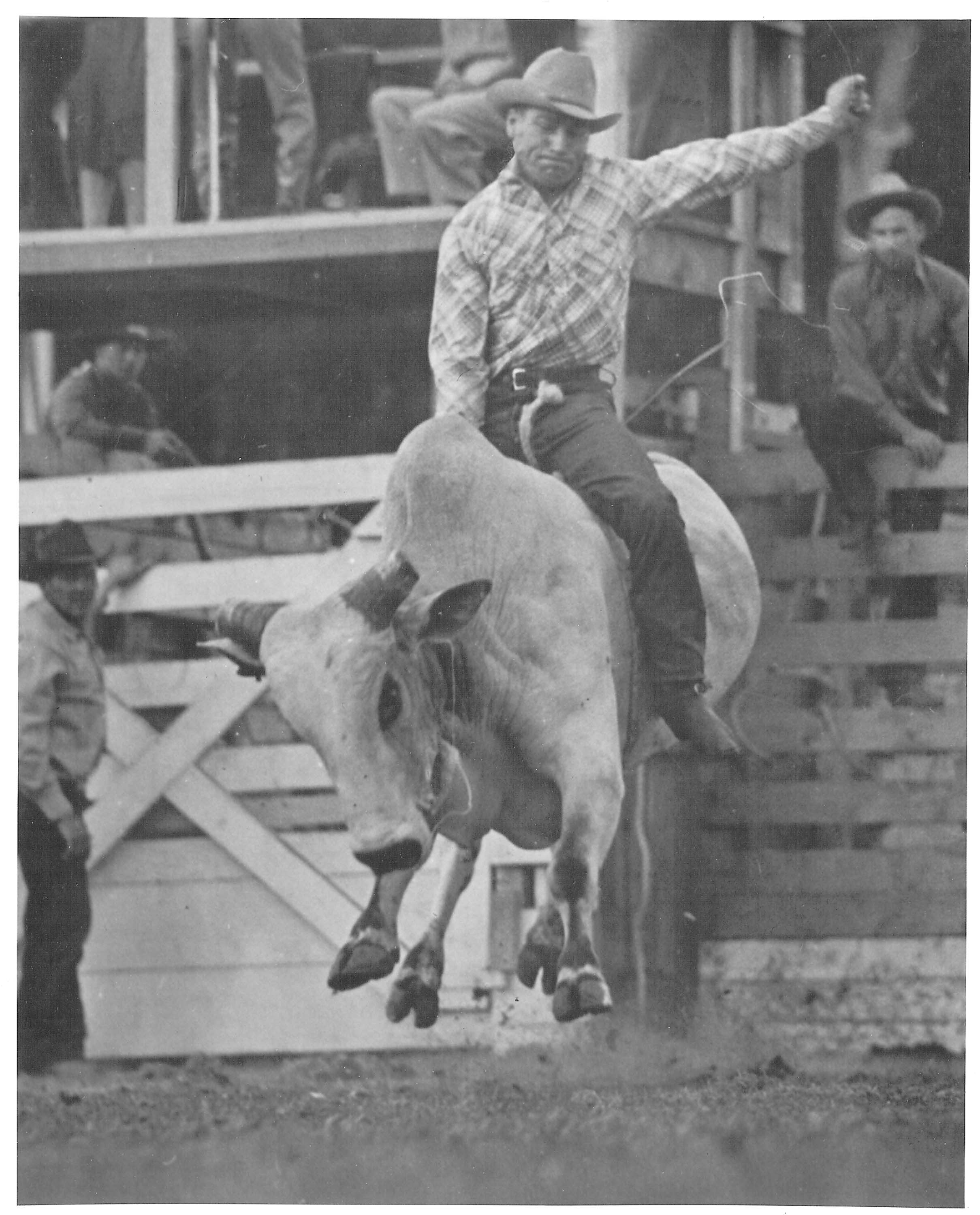 One of southern Alberta’s famous cowboys, the late Earl W. Bascom, has became the first rodeo champion to be inducted into Canada’s Sports Hall of Fame in Calgary. Bascom is well known for not only his rodeo accomplishments, but also his bronze art and pioneering rodeo invention.
At a recent ceremony held at the Hall of Fame Museum at Calgary’s Olympic Park on July 17, Bascom was awarded Canada’s highest sports honor and was named a “Canadian Sports Legend.”
Representing the family, son John A. Bascom received the induction honors on behalf of his late father.
“I was just astounded by it,” said John about first finding out about his dad’s induction. “Of all the years the Canadian Sports Hall of Fame existed, which is 60 years, it has never honoured a rodeo cowboy or even acknowledged the sport. For my father to represent all the thousands of cowboys and cowgirls as the first inductee, I just thought that was unbelievable.”
As part of the honour a permanent display has been set up that pays tribute to both Earl’s rodeo accomplishments and his cowboy art. The exhibit includes several rodeo belt buckles he designed, a saddle and buffalo head sculpture, a pair of his cowboy boots, a hat and a saddle. John noted that more items are being selected by the family to add to the exhibit.
With Bascom’s induction, the sport of rodeo became the 65th sporting event represented in the museum’s 40,000 square foot facility.
“Bascom’s incredible achievements will now be shared with all Canadians in perpetuity,” said Mario Siciliano, president of Canada’s Sports Hall of Fame, “inspiring generations of Canadians in sports and in life.”
Earl passed away in 1995 at the age of 89, but he lived a life any cowboy would’ve been proud of. Born in Utah in 1906, Earl Bascom moved with his family to the Raymond area in 1914 where his father worked as a foreman for rancher Ray Knight.
In 1916, the Bascoms moved to Welling Station in Cardston County where they ran cattle along Pot Hole Creek. The family later ranched in New Dayton, Lethbridge and Stirling.
Earl Bascom competed in rodeo events from 1918 to 1940, winning assorted titles, including All-Around Champion honours, competing in all three of the Rough Stock events (Bull Riding, Bareback and Saddle Bronc), as well as steer decorating, wild cow milking and wild horse racing.
In 1933, he set a new world record in the Steer Decorating event. He set an arena record in Raymond that same year, shared John.
Earl and his brothers, Raymond and Melvin, along with their father, John W. Bascom, were all rodeo cowboys. They put on weekend rodeos at the Bascom Ranch.
As part of the rodeo, the Bascom boys designed and built a new style of rodeo bucking chute. Rather then the usual “shotgun” chute, the Bascoms bucking chute had a side gate or side-delivery, explained John. It was a much safer design and became the early prototype of all modern rodeo bucking chutes used around the world.
Local stampedes where Earl competed include Raymond, Magrath, Cardston, Fort Macleod, Lethbridge, Stirling, New Dayton, Milk River and Sweetgrass. He also made several appearances at the Calgary Stampede.
Earl demonstrated an extraordinary enthusiasm and aptitude for rodeo when the sport was in its infancy, added John.
Bascom is known internationally as the “father of modern rodeo” for his rodeo gear and equipment inventions which include the modern rodeo saddle, the modern bareback rigging and modern rodeo riding chaps. These innovations helped change rodeo from a cowboy’s pastime into an international sport.
“He was always inventive, if you gave him a problem or something that was broken, he’d fix it. The reason he invented the hornless saddle is because he made his saddles from scratch, he didn’t have a horn for awhile and got by without it realizing that it was a more of a negative because it could hook on your belt, reigns or pant leg,” said John.
He was always resourceful and his ability to see things through transitioned into his art. It was a way for him to visually capture his experiences.
Earl attended art school at Brigham Young University, graduating in 1940. Related by family bloodlines to two famous western artists, Frederic Remington and Charles Russell, Bascom went on to become an internationally known artist himself. As Remington is known as the “father of cowboy sculpture,” Earl Bascom continued in that vein of family talent and has been acclaimed as Canada’s most famous cowboy artist and sculptor.
“As a Canadian rodeo athlete and cowboy artist, Earl Bascom is a national treasure,” stated Helena Deng, senior curator of Canada’s Sports Hall of Fame.
Besides his recent induction into Canada’s Sports Hall of Fame, Earl Bascom has been inducted into the Raymond Sports Hall of Fame and the Lethbridge Sports Hall of Fame, as well as the Alberta Sports Hall of Fame and the Canadian Rodeo Hall of Fame. Last year, Bascom was the international honoree of the National Day of the Cowboy.