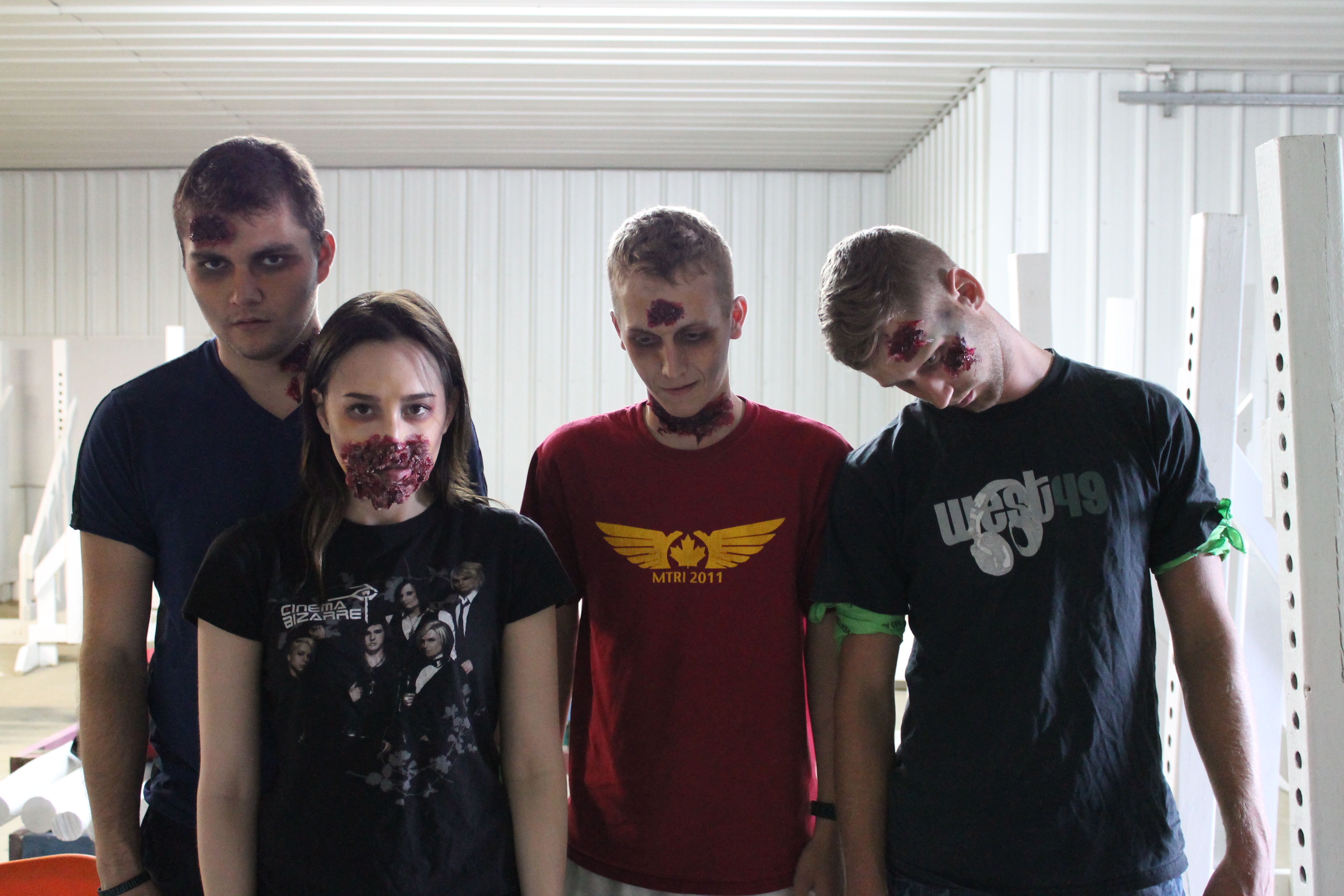 On Friday night 100 people jumped at the opportunity to see if they could survive a mock zombie apocalypse scenario at the Magrath Ag. Complex. The Magrath FCSS organized the event to target the teen demographic that is often unintentionally overlooked at Magrath Days.
“It has always been a tough thing to do. We’ve always tried to do a teen event the Friday night (of Magrath Days) and it has had very limited success over the years. So almost right after last years Magrath Days we sat down and decided that we wanted to have an epic teen event,” shared Ryan O’Neill, Magrath FCSS director.
The event kicked off at 9:15 p.m. and the atmosphere was further established through music, props and zombie makeup.
The goal was to be the last human survivor. Participants had to outrun and escape 12 agile zombies without losing their red armbands
“I think that was the part that is the coolest. These guys could hurdle over large hay bales and do a flip in the air or cartwheel across the grass chasing kids. It really made it a lot more intense because of their abilities,” said O’Neill about the Anomaly Parkour and Free Running team from Lethbridge who volunteered to be zombies.
Parkour is a sport based around the idea of getting from point A to point B as efficiently as possible using jumping, climbing, rolling, vaulting skills. Often times most people add flips and acrobatics for aesthetic and style, explained Jon Hafichuk, founder of the Lethbridge team.
Survivors were not left defenseless, they could render zombies immobile for 45 seconds by striking them with marshmallow ammunition, but only if they made it to the ammunition station in time, explained Shay Riggin, Magrath FCSS programs coordinator, who spent the better part of a year planning the event with her coworkers and friends.
“The idea behind the stations was if an apocalypse actually happened or a state of emergency, there are certain things that you need to survive. And all of the stations were based around that so we had a food station, a water station, a station to help you find shelter, a station to earn protection and ammunition.”
With each station a new wave of zombies with different powers were unleashed.
“It shifted throughout the game, it didn’t go in ascending order necessarily. We balanced it with the amount of people left alive because we wanted the game to continue. We had zombies that were only allowed to walk, zombies that could only stand, others than could run all the way up to climbing and flipping.”
Once captured, participants became a zombie and joined in the hunt to track down survivors. In the end, the last man standing was Zack Bracha.
“We are extremely proud of how it turned out. I thought it was an amazing event,” said O’Neill admitting the organizers may have been a little naive about how much work and time it would take to successfully pull off. He added a special thanks to the Magrath Ag. Society for donating the use of the land..
Many teens felt the event was a great addition to Magrath Days, but it was also a fun family activity with participants between the ages of 14 and 55 enjoying the evening.
In order for the event to continue, a large volunteer pool will be needed to organize a similar event, said O’Neill about the possibility of a repeat event next year.