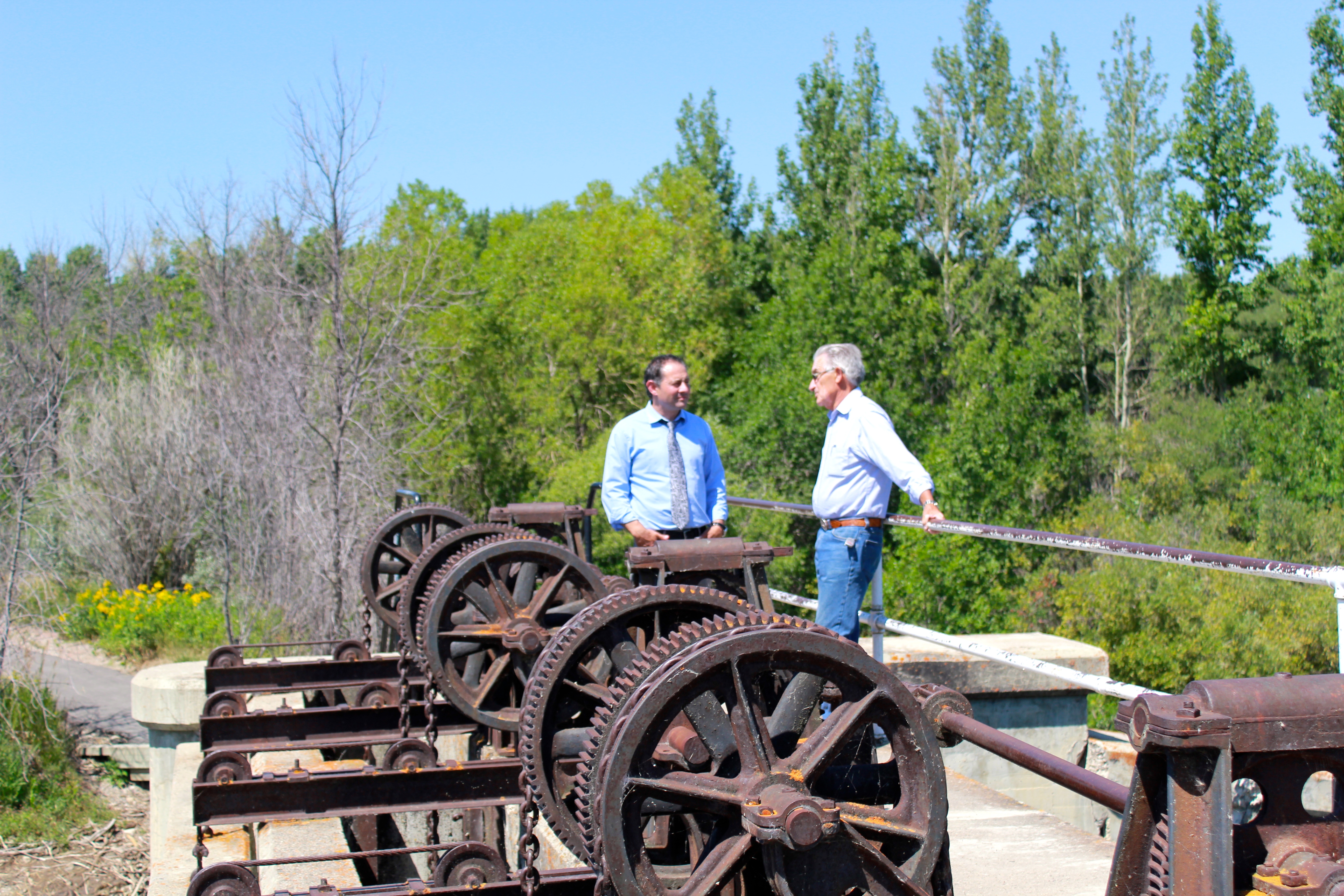 Magrath’s Galt Canal National Historical Site will receive needed improvements thanks to infrastructure funding under the federal government’s Canada 150 Community Infrastructure Program.
The Town of Magrath will receive $100,000 to restore the historic head-gate structure in the Galt Canal. MP Jim Hillyer, on behalf of the Minister of State for Western Economic Diversification, made the announcement on July 29 at the Lethbridge Public Library.
“Preserving our history is a way to keep us grounded and connected with the values and ideals that made us successful in the past,” said Hillyer after visiting the site the following day. While there he reflected upon the history of irrigation in southern Alberta and the fact that it was what initially brought people to settle the area.
The grant is part of a $150 million commitment by the Government of Canada to support communities coast-to-coast and create a lasting legacy as the country prepares for Canada’s 150th anniversary in 2017.
“Every year we can see the crack (in the head-gate) getting bigger and bigger,” said Magrath councillor Richard VanEe as to what made the project a priority for council to peruse grant funding to fix. Council realizes the signifigance of the canal and the role it played establishing the community.
Sir Alexander Galt, a father of Confederation, with his son Elliott T. Galt and son-in-law Charles Alexander Magrath, impacted settlement in southern Alberta by creating irrigation systems that brought settlers to the region.
Magrath was settled as a result of a contract between the Church of Jesus Christ of Latter-Day Saints (LDS) and the Alberta Irrigation Company. The Church sent settlers to build and maintain an irrigation canal in exchange for land and pay.
A water source was needed to settle the arid land, the Galt Canal was conceived and the project’s directors recruited Mormon settlers for the task. Latter-day Saints were uniquely fitted for
the job because of their experience settling Utah and Idaho—two other places where extensive irrigation projects were necessary for settlements to thrive, reads the LDS Church History Website.
In November 1899, the Galt Canal was completed. At 145 kilometers (90 miles) long, it was Canada’s first large-scale irrigation system.
A marker placed at the head-gates in Magrath by the Historic Sites and Monuments Board of Canada credited “British capital, Canadian enterprise, and the vision, experience and labour of Mormon pioneers” with completing a project that would “fructify and beautify the land.”
Originally built out of wood, portions of the canal were added and remade in cement in 1920. The National and Provincial Historic Site features the remains of the original wooden piers, the ruins of the diversion weir and associated gates.
VanEe said it’s a big repair job, and the town wouldn’t be able to afford it otherwise. The total cost of the repairs is estimated to cost around $200,000 shared VanEe, with the Town willing to match up to a $100,00 to restore the site and make it a safer place for locals and tourists to visit. With the growing tourism push behind promoting the Mormon Trail, the site is expected to grow in popularity.
“I’m extremely grateful that the government decided to help us in Magrath. We’re a little community and it’s not very often we get a lot of help, so it was really nice when we heard the news.”
Planned improvements will include metal work and concrete repairs, a safety fence along the top and the hiring of an engineer to ensure that the site is structurally sound and oversee that safety protocols are met.
“It really emphasizes some history for southern Alberta. It’s not just Magrath, but the whole area, that’s what started the irrigation, that head-gate.”
The town is aiming to start the project in April of 2016 with the grant guidelines requiring the project to be completed by Nov. 31 2016.