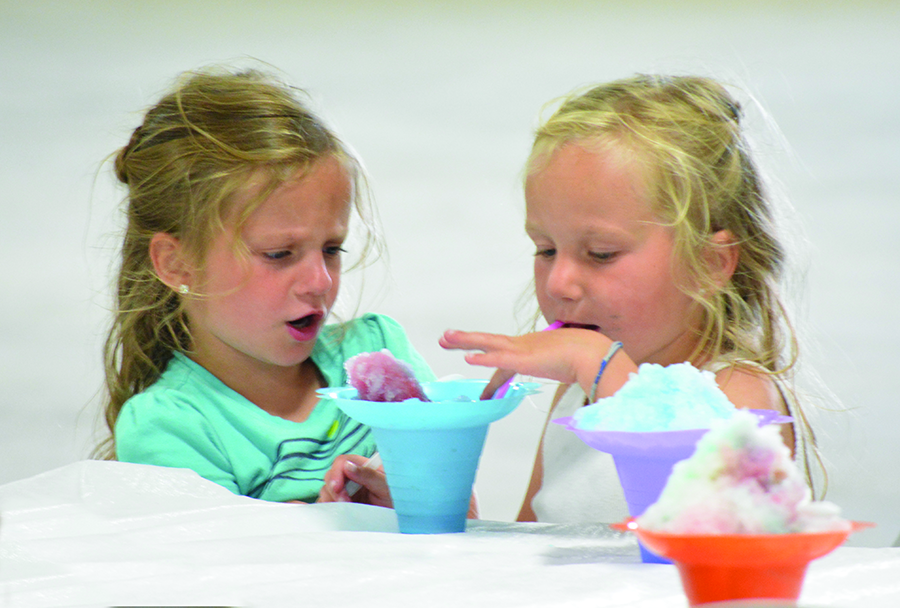 Sisters, Payton (left) and Josie (right) Murray are surely enjoying their snow cones at the first farmerÕs market of 2016 in Magrath.

Home grown food, live music and entertainment are just some of the things people can expect all summer long inside the Magrath Arena for the towns finest market.

Leisel Quinton has been managing the market for the last two years after taking over for Ray Sauer.

Sauer put together the first farmers’ market in town just over three years ago.

Quinton has done work for markets in the past and thought it was a good idea for her to continue the tradition, especially with what it does for a community.

“It’s just a great place to come together as a community, socialize and have some food and support local,” said Quinton.

The market draws in people from all over the area and doesn’t only benefit Magrath.

According to Quinton vendors come from Raymond, Cardston and even Lethbridge.

Like years past, there are a lot of exciting things for people to enjoy.

“There’s the civic squeal outside selling his yummy smoked meats, along with the Flyin’ Hawaiian. We also have people here who bring home baked goods, so it’s a great opportunity for people,” said Quinton.

Even the younger crowd use it as a chance to be innovative.

“We have four vendors under the age of 20, some as young as my grandkids,” laughed Quinton.

Stephanie Murray, resident of Magrath, says it’s a great chance for her and her family to get out and socialize.

“We love coming out and seeing everybody along with supporting local people who are selling their goods. The kids also love all the sweets,” laughed Murray. “It’s always nice to get out of the house and see what’s going on.”

From what Quinton has seen from previous years the support has been great and continues to grow.

“Every week (last year) I saw new people who i didn’t recognize, so I know they are coming from other towns and supporting us. There are also loyal customers who come here every week,’ said Quinton.