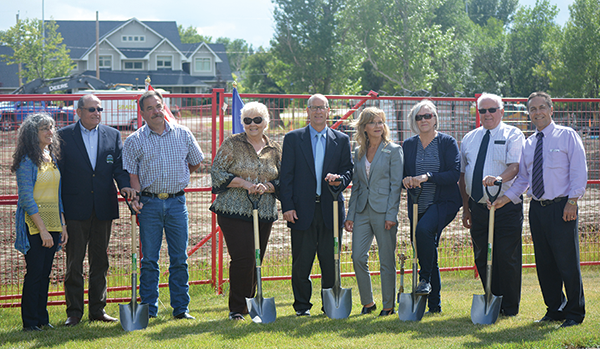 Seniors at Diamond Willow Lodge in Magrath will be making the move to a brand new facility sometime in the fall of next year.

Construction of a new seniors’ lodge is underway, across from their current building.

Crews from MDG Construction arrived on site in early May to begin work on the new 43 unit building.

The Alberta government owns the lodge and the Chinook Foundation operates it.
Kim Schnoor, CAO for Chinook Foundation, says the project will create better living situations for seniors and Magrath will become a more popular destination for older people who are looking for a place to live.

One of the common concerns was the size of the rooms in the current location.

“All the rooms are much larger than previous lodges and we are excited about the appeal it will bring to the lodge and the residents of the community,” said Schnoor.

On top of the rooms being bigger, the new Diamond Willow Lodge will provide bachelor and one-bedroom units, complete with full bathrooms, kitchenettes, delicious home-cooked meals and snacks, housekeeping, and recreational and entertainment opportunities.

Also, the size of the lot is more spacious and will allow the possibility of adding 12 more units later on.

“I think all of the residents in the Magrath community and surrounding areas recognize the need and the benefit of living in the lodge. Most have felt the small size rooms has been a challenge,” said Schnoor.

As for cost, Schnoor is confident the new building will have similar pricing to the current lodge.

“The mandate from the provincial government is for us to provide housing for low to moderate income seniors, so it will be a similar financial model that we currently operate. We don’t anticipate a change,” said Schnoor.

Mayor Russ Barnett believes this is a game changer for the community.

“It provides great accommodations. The current lodge has tiny rooms that people didn’t like, small hallways, and is a difficult building to maneuver in. It also allows families and residents to stay in Magrath because of the quality of living,” said Barnett.

Gloria Alston is the current president at Diamond Willow Lodge and is extremely excited about the new facility.

“I started working here about eight years ago. As soon as I came, we started doing a little bit of ground work and a little bit of exploring. We knew these rooms were small and the new baby boomer generation wanted more space,” said Alston.

The Government of Canada and Alberta jointly committed $6.3 million to the project through investment and affordable housing.

An additional $2.6 million was provided from the province through the Alberta Social Housing Cooperation.

The project is expected to be complete by Oct. 2017.

What will happen to the old Diamond Willow Lodge is yet to be determined.