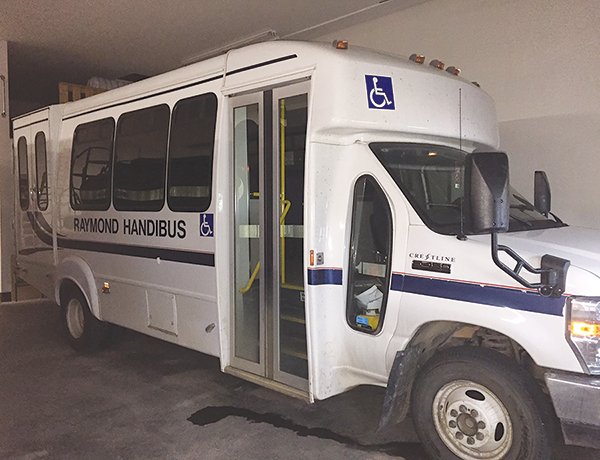 A popular transportation service among seniors in Raymond is looking for help after the decline in volunteers have weakened their service.

The Handibus in Raymond has been struggling lately and hasn’t been able to offer as many road trips to the people in town as much as they used to.

When running on a consistent basis, the Raymond Handibus is a viable and much needed service for residents of Raymond and surrounding areas.

It is also the only service offered in Raymond for people who require a vehicle that can accommodate wheel chairs and walkers and an important service for those who cannot be transported in a regular vehicle due to a physical or mental disability.

The Handibus transports passengers to appointments and approved recreational activities.

Currently, there are three board members, including Nicole Sinclair Terry, along with one driver. There just isn’t enough people on board at this time.

“We’re really needing bodies to help us fundraise, which is hard to find and we also need drivers. The lack of drivers is a big problem,” said Terry.

The reason behind it has a lot to do with the lack of funding. They can’t afford to pay the drivers as much as they would like and sometimes the schedule can be very erratic and not very appealing.

“We run off of whatever the Town of Raymond gives us, which is a small portion along with the County of Warner. That’s pretty much what we run off of. A very small amount,” said Terry.

Currently, the Handibus is technically available Monday to Friday, but have had to turn people away due to having no driver.

The one driver they do have has another job and is not able to be on call at all times.

The hope is to set up a more structured schedule in the fall, where the drivers would have set times rather than being on call.

“We are thinking of running the bus just three days a week and have people book their appointments on those three days. Once it starts getting used more and people become aware that it’s available, we can expand and hopefully have more drivers by then,” said Terry.

Terry can’t stress enough the importance of having the Handibus running at its full capability. She says the need is there and especially in a town where there are no other forms of public transit.

“It gets used predominately by patients who need to go home from the hospital. It’s also being used by Good Samaritans and the lodge. There are a few people in the community who doctor in Lethbridge who also phone quite often,” said Terry.

Another key factor in why Terry believes this service is crucial to the community is the mental health aspect of it. It’s what keeps her heavily invested in the operation of the Handibus.

“It’s a big part of someone’s quality of life. If someone is stuck in their home and can’t get out for a walk, their quality of life goes down. Their mental health can deteriorate and a simple trip outside can really help with that,” said Terry.

The Handibus offers trips to places in and around Raymond along with trips to Lethbridge, Magrath, Stirling, Cardston, Coaldale, Warner and Waterton, depending on the number of passengers.

Currently, Terry has been in contact with some people about driving, but needs more help in other areas. To donate funds or your time or for any other inquires, you can contact Terry directly at 403-752-5405.