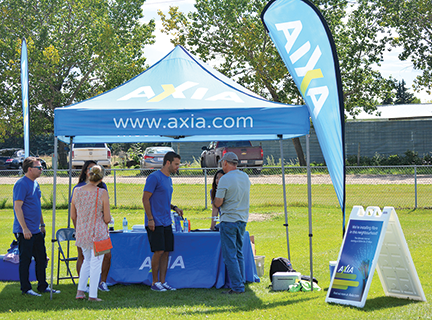 It was a long time coming, but the citizens of Raymond and Magrath can finally start singing hallelujah as reliable high speed internet will soon be in the homes and businesses of many.

It’s official, Axia announces fibre optic expansion to Raymond and Magrath and is now the seventh and eighth community to have signed up for this service.

By advocating to get 30 per cent of homes and local businesses to express their interest on Axia’s website, both communities are to become the next rural towns to receive fibre optic infrastructure from Axia.

They needed 30 per cent, but David Skabar, Manager of Residential Services, said both towns exceeded that number.

“It was like a horse race, they were going back and forth. By the time we started doing our due diligence to see if the metric would work for the communities, they had both blown through that 30 per cent,” said Skabar.

Small towns often struggle with quality internet services and the team at Axia feels strongly about providing strong internet service to everyone, starting will rural Alberta.

“We don’t feel that the opportunity that exists for rural Alberta should be any different from the people who live in the big urban centres. On the back of a lot of hard work from the broadband committee, councillors and local administration were able to bring it here,” said Skabar.

Currently, Shaw and Telus are the two main providers in these towns, but it doesn’t seem to be working as good as people would like. Skabar says this will be the best option for these communities.

“With fibre optics, you’re transmitting data at the speed of light and you can’t beat that. By putting everybody’s home and businesses on our fibre optic grid, everybody has access to the best in class technology,” said Skabar.

He adds, it doesn’t matter if you use the internet for business or if you are just a casual user.

“Whether it’s just a residential user of Netflix or a professional user like a photographer or an architect who wants to work from home, it gives them that future proof technology and all the running room required to operate,” said Skabar.

Axia was founded in Alberta and have been providing services in the province for over a decade.

Their goal is to level the playing field throughout Alberta by providing flexible commercial bandwidth services at great rates.

Prior to this announcement, Stirling was the last community to receive Axia’s services. Currently, the construction for their tower is halfway done.

According to Skabar, the timeline for construction to be complete in Raymond and Magrath is somewhere from 4-12 months.