No Cost Clothing Event happens this weekend in Magrath 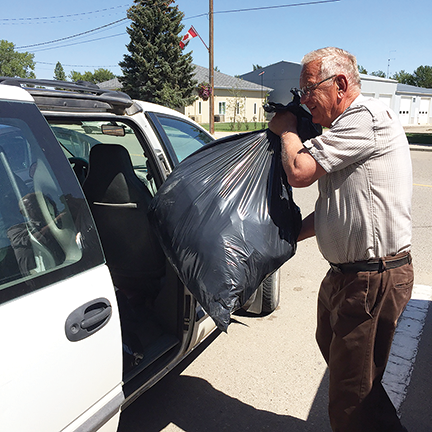 The best of the best hand me downs will be available this weekend, free of charge at the Ice Arena in Magrath.

The annual No Cost Clothing Event is being held this Saturday and will be open to the public from 9 a.m. to 2 p.m.

Seniors will have a chance to sort through the clothes tomorrow from 3 p.m. to 6 p.m., a little bit earlier than the rest of the people in town.

The event is being sponsored by the Magrath Lions Club.

The church groups in town started the event many years ago, but the Lions Club took it over in 2012.

Now in its fifth year, Roger Davies, treasurer of the Magrath Lions Club and former president, says it’s such an important cause.

“It gives people a chance to get clothes for their kids. We realized a lot of the clothes in the community were being donated to Lethbridge where you would have to go in and buy them. We figured why not give them a chance to get it for free,” said Davies.

Davies has been accepting clothing donations during weekdays since July 25. He has parked his van in front of the pharmacy and says the amount of clothing he has received this year and in years past is overwhelming.

“I am amazed with the amount of clothing that shows up every year. I have my van sitting out there and every day I get a couple of bags. I have a room in my house that is almost full to the ceiling with bags of clothes just waiting to take over the ice arena,” said Davies.

With so much clothing donated, the workload becomes unbearable at times, but the town, like many times before, continues to come through with a large amount of support.

“We’ve relied on the community to assist us. There is a lot of sorting, there’s setting up and organizing the tables. During the event itself there’s people moving things back and forth and helping people find stuff,” said Davies.

He says it’s a great cause and continues to see people take full advantage of it.

“It’s been very popular. Last year we had about 300 bags of clothes donated and we ended up having only 10 bags left at the end that we donated to the Canadian Diabetes Association,” said Davies.

The van in which you can donate will be in front of the pharmacy until the end of the day. If you would like to volunteer you can contact the Davies family at 403-388-4332.