RHS has a new man in charge 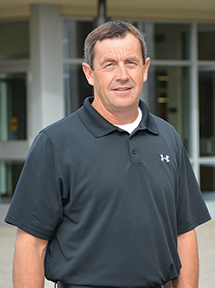 For the first time in a long time, Raymond High School has a new man in charge.

Todd Heggie is entering his first year as the school’s new principal and will be replacing Jim Ralph.

Heggie had spent six years as the school’s vice principal and said he is looking forward to leading the school.

“It’s exciting. It’s been a busy couple of weeks so far to get everything up and running, but Jim Ralph left us in a good spot. He did an awesome job when he was principal. He left the school in a position where we are ready to take off and run with it,” said Heggie.”It’s been busy, but exciting.”

It’s big shoes to fill, but Heggie said Ralph did a great job of making sure he would be ready for this year.

“I felt he prepared me well for this position. He involved me in a lot of the day to day stuff that a principal does which helped me a lot for where I am right now,” said Heggie.

Heggie plans on having an open and honest relationship with the staff and believes it’s important to be a team.

Heggie is a strong believer that working at a school is much more than a job, it’s a commitment to the students and ensuring they get every chance to succeed.

“This building is here for students to have an educational experience. It’s not here for us to have a job. The students are my number one focus and what’s best for the students is what we want to provide. They’re number one in my eyes,” said Heggie.

Heggie understands he’ll face challenges along the way like in any job and realizes that sometimes students aren’t pushing as hard as they can. It’s something he’s going to take very seriously.

“It’s been a challenge getting students to see the vision that is a necessary step for them to do the best they can and set themselves up for the future. We’ve addressed some of those issues and we are bringing in speakers to help with that. We are doing things we hope get students excited about the big picture,” said Heggie.

Through all the challenges, Heggie is extremely excited about his new position and is looking forward to what he hopes to be another great year at RHS.