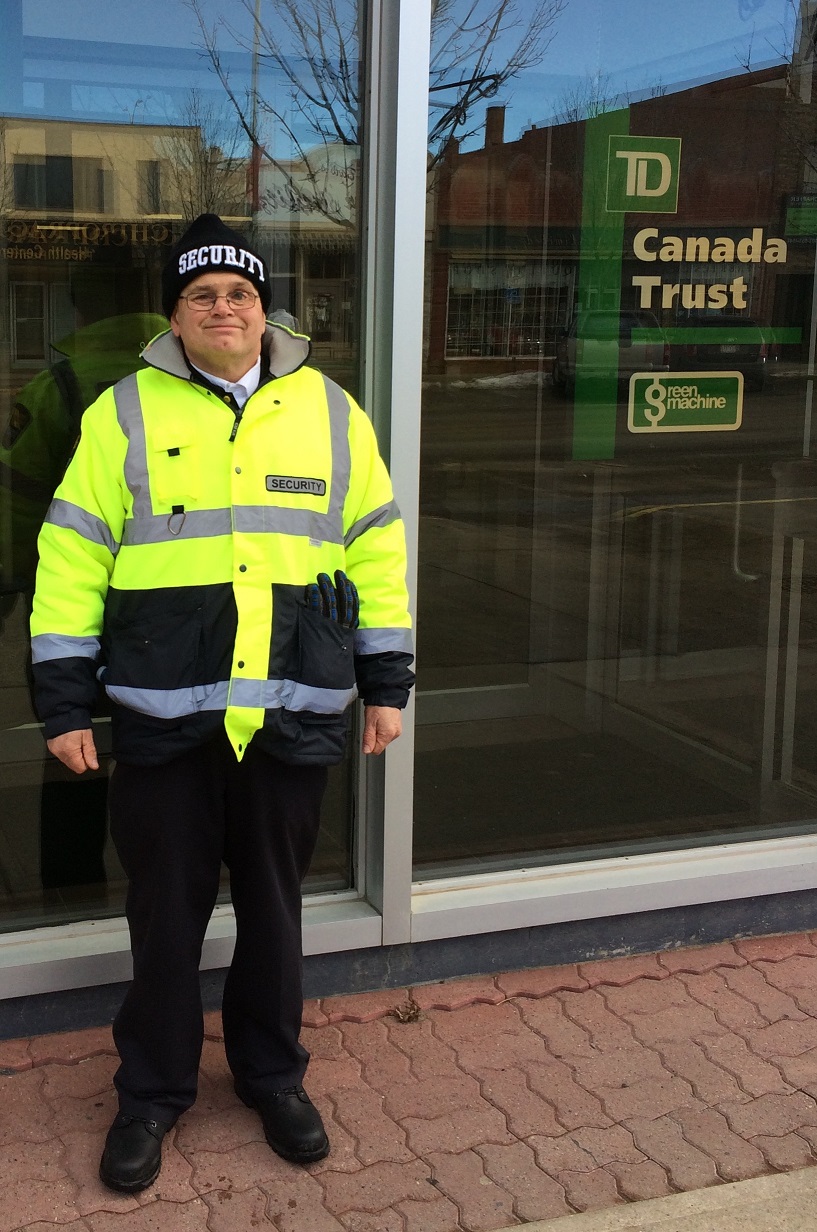 Changing vocations throughout life is something most of us have done, have given thought to, or are in the process of doing.

It is inevitable in this day and age to hold onto the same job for decades. It used to be employees would work for the same company for their entire life, but not anymore and change is good from time to time.

Raymond resident Dan Golobic made the choice to change jobs and receive Security Professional Training through Training Inc. in Lethbridge, which also has a campus in Cardston. Golobic completed training in October 2016 and it wasn’t too long after he found a quick transition and placement at James Security and was stationed at a TD Bank close to home.

“In many ways it’s better than the employment I had before I was laid off. You know how it is with the current economy,” he said, adding he previously was employed at a construction company as a janitor.

Golobic noted there are two other older gentlemen working at James Security as well, for the same reason — out of necessity to change jobs. He added, after talking with his bishop from his church, the bishop said he to was looking to transition to a new job into retirement and thought about a career in the security industry.

“Someone working in the employment office at the church had mentioned he should approach Training Inc. for training for the security guard,” said Golobic, and he added the training was excellent.

“It was really good. Everybody that was doing the training, they all had a lot of experience in that  area. They also had a knack for teaching and they related well with the students,” he said.

Primarily, Golobic said, he looks at the training and the new job as a stepping stone. “I still have a delusional idea I might be a prison guard, he joked.

“I’m trying to get in shape to pass the correctional officer physical ability test. It’s usually something meant for younger people, but I think I can do it. I need to lose a bit of weight and build up a bit more upper body strength and then I think I can do it,” he said.

According to the security professional, even in the security field there seems to be a bit of ageism going on, unfortunately.

“The emphasis is towards hiring more younger people,” but, he said there was a real mixture of ages during his training.

“Otherwise, it’s the younger generation, and typically they are people that are ranging from people trying to get a job or they are using security as a stepping stone into further law enforcement or military,” Dahl explained.

Dahl noted the professional security sector is a growing industry.

“Everything changes and the need for security is always there, whether it’s your home or your business. We certainly had some downturn because people are pinching pennies and they’re figuring out their costs. However, I have found security has stayed steady,” he said.

There are a number of programs and classes offered at Training Inc. Security Professional Training is fully-funded in partnership with the Government of Alberta.

For more information about the vocational school and the course visit traininginc.ca/occupational-training/programs-and-courses/security-professional-training.

The next start date for security training is May 23. It is encouraged to start the application process early.