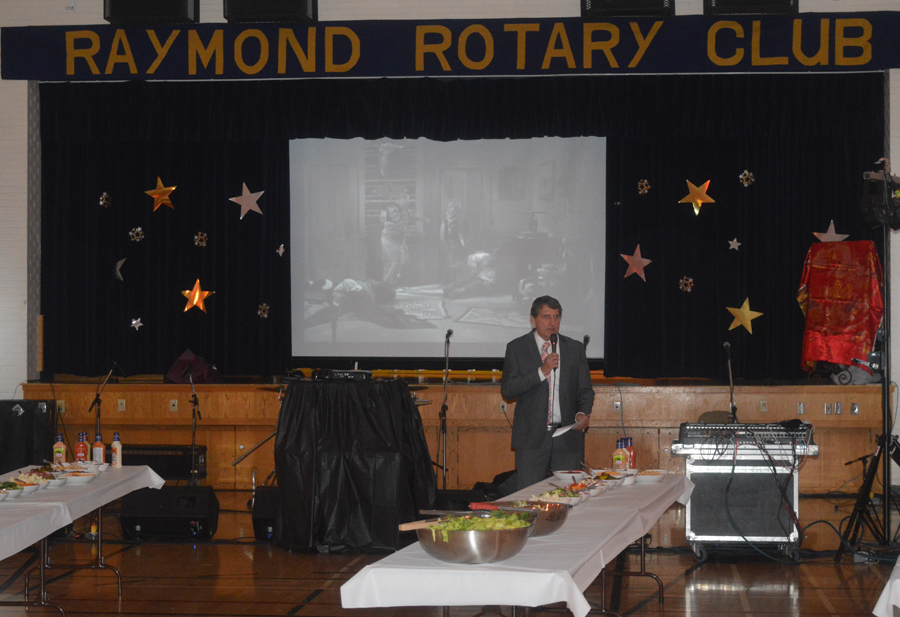 Westwind Weekly photos by Jeremy Appel Steve Leavitt was the master of ceremonies for the Raymond Rotary Club's 51st dinner and dance event on Feb. 10.

Raymond’s Rotary Club held its 51st annual dinner and dance on Feb. 10 at the town’s Cultural Hall.
The event was a celebration of the club’s 80th anniversary, so it was extra glamorous, with a movie theme that included a red carpet entrance, movie posters plastered on the walls and performances of scenes from classic movies, such as Fiddler on the Roof, West Side Story and the Wizard of Oz.
The event included a silent auction, live music and full roast beef dinner. Proceeds went towards the club’s local and international projects.
“The money we earn from this gets multiplied by Rotary International and by the district,” said club president Robert Bissett.
“You can turn $2,500 into $10,000 and we donate about 50 per cent local and 50 per cent international.”
For example, last year the club gave $10,000 to the Raymond Band.
International priorities for this year include dental clinics in Uganda and orphanage in South Africa.
About 275 people turned out to the event, which Bissett said was a “slightly better than average” attendance.
Michael Jones, a local lawyer who’s a regular dinner and dance attendee, says the event is always good time, but it’s also important to support the club’s various projects.
“It’s a great organization that we can support and it’s nice to get out for an evening,” he said.
“What I’ve always appreciated about Rotary is they try to … support our local community and they also try make sure that at least a portion of the money they’re raising goes to places where there’s significant need.
“It’s sometimes a difficult line to straddle, but I think they do a good job.”
Richard O’Brien, an invited guest from Picture Butte, hosted the movie mystery portion of the evening.
He said he’s always admired the Raymond Rotarians’ ability to punch above their weight.
“They have a long and honourable history,” said O’Brien. “They’re one of the smallest clubs in Alberta, but their achievements are remarkable.”
He cited the example of the town’s July 1 parade, which he said is the only Canada Day parade sponsored by a Rotary Club.
“You can hardly be in Raymond without doing something that the Rotary Club has sponsored,” O’Brien said.