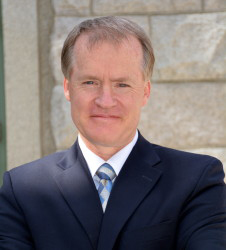 Cardston-Taber-Warner MLA Grant Hunter has apologized after coming under fire for comparing the NDP’s 2015 election victory to the 2004 southeast Asian tsunami that killed thousands.
“I in no way meant to trivialize the human suffering of the 2004 tsunami,” Hunter said in a statement.
“If my statement came across that way, I sincerely apologize.”
The comments came during his Feb. 26 announcement that he will seek the nomination for the new Taber-Warner riding, which includes Bow Island, Foremost, Taber, Coaldale, Raymond and Stirling.
Hunter had recently returned from a trip to southeast Asia, which he said reminded him of the devastating tsunami.
“Two-and-a-half ago, there was another type of disaster that happened in Alberta,” he said, referring to the NDP victory.
Government House Leader Brian Mason directly addressed Hunter’s remarks in a March 1 media scrum.
“I’m very concerned about the comments made by MLA Grant Hunter comparing the election of this government to the tsunami that took place a number of years ago in the Indian Ocean that killed 230,000 people,” he said.
“It killed people from dozens of countries, including Canadians. And to trivialize that by comparing it to the election of a government that he doesn’t like, I think is an insult to those people and those communities.”
This isn’t the first time Hunter has gotten into hot water over insensitive remarks, Mason added.
Last year, Hunter signed a letter circulated by then-Wildrose caucus colleague Rick Strankman comparing the NDP’s carbon tax with Holodomor, the Ukrainian famine that is considered by many to be a genocidal act.
Mason called on UCP leader Jason Kenney to distance himself from Hunter.
“Mr. Kenney promised Albertans that he would end ‘bozo eruptions’ in the UCP caucus,” he said.
“He’s clearly failed to do that and I think that he needs to step up and apologize, and take steps to ensure that these types of disgraceful and insulting comments from his MLAs cease.”