Raymond School of Agriculture to be sold to third party 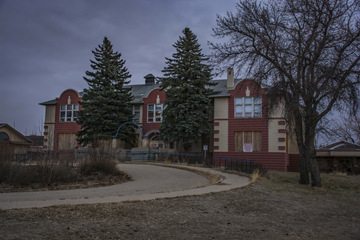 Raymond town council turned down an opportunity to purchase the historic Raymond School of Agriculture building from Alberta Health Services at its March 6 meeting after a third party expressed interest in a bid.
“We accepted a proposal from Alberta Health Services that would allow AHS to sell the property to an interested party without exposing the town to any negative consequences,” said Mayor Jim Depew.
“We had to back out, so they could make a deal with somebody else.”
Depew said it’s unclear what the buyer will use the building for, but if they want to convert it to another use, they will have to run it by council.
“It’s zoned educational, so it will have to come back to us if it’s turned into anything else,” he said.
Stewart Foss of Save the RSA, which has been pushing for the town to purchase the building, told the Westwind Weekly that he has mixed feelings about the town’s decision.
“We were disappointed that the town declined to purchase it … because part of it is that it removes the town from future decisions about the use of the building, so now they’re a passive observer,” said Foss.
“They’ve been delegated a responsibility from the province, (like) any municipality when it comes to preserving their own history, so we felt like this was an opportunity for the town to take an active role.”
However, Foss said Save the RSA is pleased that someone stepped up to purchase the building.
“We’re still optimistic the building will be saved, it’s just the town stepped away from participating in it,” he said.
“We hoped the town would engage in an open process, that they would take possession and engage the community in whether this facility was adequate as a community facility or whether it should be sold.”
Foss credited Save the RSA’s advocacy for keeping the building intact.
“If we rewind in time back to February of last year, demolition was a done deal. It was an absolute. There were no questions about it.
“Our group started by simply saying, ‘If it’s to be demolished, show us documentation that establishes that that’s the only possible outcome here,’” he said.
“As AHS released documents, it became very clear that the building was feasible and in very good condition considering it’s age. It didn’t make sense to demolish it, so we’re 180 degrees from where we were two months ago.”
The RSA opened in 1920 and is the sole remaining structure out of six Agriculture Colleges the province established in Olds, Claresholm, Vermilion, Youngstown and Gleichen.
From the 1930s until its 2009 closure, the building served as a mental health and long-term care facility.
In 2013, Alberta Culture and Tourism recommended its preservation as a historic site.