Lakers win 1A girls provincial championship with victory over Foremost 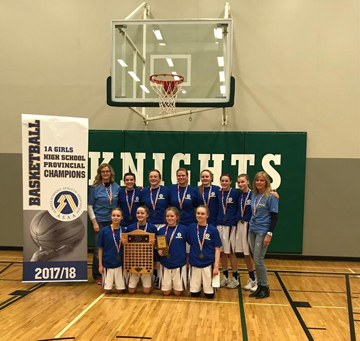 It was a golden weekend for the Stirling Lakers senior varsity girls basketball team.
Stirling took the gold medal Saturday in Lacombe at the 1A Girls and Boys Alberta School Athletic Association Provincial championships at Central Alberta Christian High School.
In a thrilling championship game, Stirling overcame a slow start to emerge with a 74-71 win over Foremost.
The Lakers trailed 20-9 after the first quarter, but a strong second stanza, and 26 Stirling points, gave the Lakers a 35-34 lead at the half.
“We were down 20-9 in the first quarter because our shots were not going in,” said Lakers coach Donna Branch, who added the final was played inside a different gym. “This was our first game in this gym and sometimes it just takes time to adjust. I just told the girls to be a bit more patient so that they could get the next best shot and it would fall.”
Another strong third quarter, where the Lakers defence held Foremost to 13 points, helped propel Stirling to the championship. Foremost made a strong push in the fourth quarter, but did not have enough to complete the comeback.
“Defensively, we had a plan and when that plan failed they scored,” said Branch. “I just told the girls to change the angles that they recovered at, to get their hands of and to switch hard on all screens. Then our help would come naturally. That is what they did. They also communicated much better and got some good rebounds.”
Savannah McKee led the Lakers with 34 points, while Sadie Nelson added 13 and Gracie Nelson chipped in with 10.
The Lakers advanced to Saturday’s final after an 81-59 win Friday night over Hines Creek Composite in the semifinal. McKee and Sadie Nelson scored 30 points each for Stirling, as the dynamic duo led the way.
Stirling’s two leading scorers were front and centre earlier on Friday in the opening game, as Nelson struck for 26 and McKee had 20 in a 65-37 win over Parkland Immanuel Christian.
The Lakers had a first-round bye, and did not play Thursday, as the team awaited the winner of the Parkland-Bassano High School contest.
This year’s edition of the Stirling Lakers was a relatively young team, which consisted of two Grade 12s, three Grade 11s, two Grade 10s and three Grade 9s.
“The girls have worked together well all season and their consistent effort has led to some great results,” said Branch, whose team took a 25-3 record into provincials.
That included a 9-1 record in the Deep South League, good enough for first place, while the other victories came in a series of five tournaments.
In those five tournaments, the Lakers earned an impressive record of 13-2, and were tournament champions at Olds, Picture Butte High School and Stirling’s Renee Pitcher tournament. The team was also finalists in the Coaldale Christian tournament and consolation winners at the W.R. Myers tournament in Taber.
In zone competition, the Lakers went 3-0, and overtook the No. 1 seed Foremost for Stirling’s sixth consecutive South Zone Championship.
“We were ranked No. 2 all year, until we won zones,” said Branch. “However, we had very few games that allowed us to compare ourselves to other 1A teams in the province. We just had to do what we do well. We are good shooters and knew that if we tightened up our defence we would do well.”
Branch added the team repeatedly talked about four keys to success.
“We needed to be mentally and physically prepared. We needed to be confident in ourselves. We needed to remain positive no matter what the circumstances. Most importantly, we needed to have fun.”