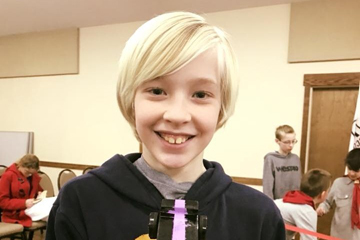 Photo courtesy of Go Fund Me Sterling Bohn of Stirling created a crowdfunding campaign for cancer research that people can donate to instead of giving him gifts for his birthday.

Sterling Bohn, a 10-year-old Stirling resident, presented to village council at its April 4 meeting about his Go Fund Me campaign to raise $1,000 for the Canadian Cancer Society for his birthday.
So far Bohn, whose birthday was on March 25, has raised $520.
The donations are in memory of his later grandfather Selk.
“Rather than getting birthday presents for his 10th birthday, he wanted to raise funds for cancer,” said Mayor Trevor Lewington.
“It’s pretty awesome that this kid (said), ‘No. I don’t want anyone to buy me anything, I’d rather that we raise money for cancer research.”
Those interested in making a donation can visit https://www.gofundme.com/sterling10bdaycancersucksfundraiser.

Council also passed the first two readings of its Tax Rate Bylaw amendment, which will see the seniors tax increase by one per cent and the education requisition increase by an average of 10.8 per cent.
Lewington said the major increase in the education tax, which is collected by the village on behalf of the province, was unexpected.
“Both of the requisitions went up, which means we have to find a way to collect those dollars,” he said.
“It’s a very significant adjustment by the province, so that was a big surprise to us, for sure.”
Lewington clarified that not everyone’s property taxes will increase by 10.8 per cent. That was just the amount that the village needs to raise to pay the province.
“The average impact to a property owner in Stirling is somewhere between $120 and $160 for just that piece,” he said.
“There’s not really an average percent increase, because your property taxes are based on assessed values and those change every year.
“Some people could go down if their property assessment went down, but if your assessment goes up and the rate goes up, then you kind of get a double whammy there.”
The bylaw’s third reading is tentatively slated for council’s April 17 meeting.

Village looks into possibility of another municipal census

Administration is examining the potential for the village to conduct a 2018 municipal census, a year after its previous one.
“It was just a conversation of whether the cost of doing that census is worth it,” said Lewington.
Usually the village puts out a Request for Proposal and locals bid on it.
“Someone has to go door-to-door and talk to people, and add up the numbers,” the mayor said, adding that it’s important that the village has the most recent population data when applying for grants.
“Part of the reason you do a municipal census is that there are many grant programs that are based on per capita funding and there’s a number of things that we participate in where we have costs allocated based on per capita funding.
“But on the other side, it costs you more to belong to some things.”
Administration is going to come back with further information at the next meeting.