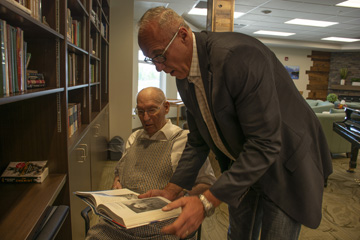 Westwind Weekly photo by Allison Billings Medicine Hat-Cardston-Warner MP Glen Motz with Second World War veteran Gordon Innis at Magrath’s Diamond Willow Lodge on May 16. Innis has a photo in a new book called “Saints at War,” which is about Mormon soldiers.

Medicine Hat-Cardston-Warner MP Glen Motz stopped by the newly-renovated Diamond Willow Lodge for lunch on May 16.
Although Motz was unable to attend the lodge’s official opening in April, he did have an opportunity to tour the new facility beforehand.
The MP praised the “modern, comfortable surroundings” that “feel like home.”
He announced that the lodge will receive an additional $20,000 in federal funding from the Enabling Accessibility Fund.
Motz says this money will go towards making the extensive trail system surrounding the lodge more accessible to residents.
But he wouldn’t let the present federal government take all the credit.
“As you know, this facility was funded jointly between the federal and the provincial government,” Motz said, adding that the funding was announced in 2014 under the previous federal government of Stephen Harper’s Conservatives, not the current Liberal government.
The same is true of the provincial funding, as the late Jim Prentice, a conservative, was premier before losing to the NDP in 2015.
Motz was elected in a 2016 byelection to replace deceased MP Jim Hillyer, who was a backbencher in the Harper government.
The MP also took the opportunity to meet with Gordon Innis, a resident whose photography is included in a new book on Mormon soldiers during the Second World War.
Cardston-Taber-Warner UCP MLA Grant Hunter was unable to attend the lunch, but Patty McClean from his office was there to represent him, which she described as a “delight.”