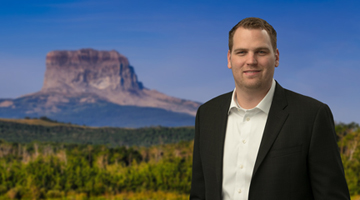 There are now two candidates vying for the UCP nomination in the new Cardston-Siksika riding formed from parts of the soon-to-be-eliminated Cardston-Taber-Warner and Little Bow boundaries.
Current Little Bow UCP MLA David Schneider announced he won’t be running in 2019, opening the door for Marc Slingerland and Joseph Schow, two party members who have very similar views and goals, sharing an emphasis on fiscal and social conservatism.
Schow, a political consultant with Mettle Campaign Strategies who resides in Cardston, is the more recent contestant in the race.
Schow described himself as “part of a movement to restore that Alberta advantage.
“That means focusing on families and ensuring that there are good-paying jobs for Alberta families … that there (are) low taxes for them to keep more money in their pockets at the end of the month and the right to make sure that we get rid of unneeded government waste and regulation that’s holding back our province.”
He’s also an advocate of “parental choice in education.”
Schow says his prior experience in politics means that he’ll be able to get the job done on day one, without a steep learning curve.
“I know exactly what I’m getting into and I know exactly how to do this job very well from the get go,” he said, adding that he’s worked for politicians in both Edmonton and Ottawa, as well as helping run Jason Kenney’s PC and UCP leadership campaigns.
Living in the riding is also an asset, Schow said in a subtle dig at Slingerland, who currently resides in west Lethbridge.
“I have a lot of respect for Marc,” he added.
Schow boasts eight endorsements from Alberta MLAs and MPs, including UCP house leader Jason Nixon and Sherwood Park-Fort Saskatchewan MP Garnett Genius.
Slingerland, the principal of Calvin Christian School near Coalhurst, entered the Cardston-Siksika nomination race in early April.
He said his experience in education makes him the right man to take on the NDP candidate in Cardston-Siksika in 2019.
“I’ve seen the NDP government, not only in the economic hole they’re digging our province into, but also they are … jeopardizing the social foundations of the province and jeopardizing the rights of Albertans,” said Slingerland.
“That was important enough to me that I was prepared to leave the job that I love and put my name forward to try to let my experience serve the people of Cardston-Siksika.”
He cited the NDP’s Bill 24, which mandates gay-straight alliances and prohibits teachers from informing students’ parents of their membership, as an example of the NDP’s “statist ideology” he claims is undermining Alberta’s social fabric.
Slingerland, a four-time candidate for the Christian Heritage Part, is endorsed by Peace River-Westlock MP Arnold Viersen, as well as former Lethbridge MP Rick Casson and former Little Bow MLA Ian Donovan.
He desribed Viersen’s endorsement in particular as “really special. “As a sitting MP and as someone I know who has brought social issues to the fore in government, that has been a model for me.
“We both come form a reformed Christian background, and so I’ve watched his career with quite a lot of interest. We come with a similar worldview and approach to service.”
In order to add one new riding each to Edmonton, Calgary and Airdrie, the non-partisan Electoral Boundaries Commission had to eliminate three rural ridings, including Little Bow.
Cardston-Taber-Warner MLA Grant Hunter, who originally said he would seek the Cardston-Siksika nomination, is now running in the new Taber-Warner riding.