Jones & McCulloch are Canadian comedy at its finest 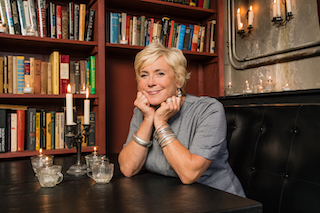 If you’re Canadian — you’ve probably watched an episode of “This Hour Has 22 Minutes” or “The Kids in the Hall” on CBC or online. Cathy Jones and Bruce McCulloch share the stage, while they bring their unique brands of comedic gold to the Esplanade Theatre this Saturday in Medicine Hat.
According to McCulloch, his portion of the double-bill is loosely entitled, “Tales of Bravery and Stupidity” — which the multi-talented actor, writer, director, author and comedian joked is what his life is, now and then. It’s half stand-up and half storytelling. “And some emotional content, because I’m older now.”
McCulloch noted he’s always thought Jones was funny and the two comedians will compliment one another on stage. “I’ve always enjoyed watching her. It’s great to be able to have someone you know on stage with you and in the car with you for a couple of weeks – just to make it more fun.”
During a recent podcast with Marc Maron, McCulloch said the two comics mostly talked about how comedy is more important than ever in 2019.
“There’s something so great about the old-fashioned thing of people get dressed, they come to a theatre, and they hope it’s going to be good. And we travel from our homes to come there, to be nervous backstage, to come out and share with people. I think it’s a human connection. In this weird world it’s even more important,” he explained.
McCulloch recently moved back to Canada, after living in the U.S. for almost 20 years — “To only have moved away do you realize how sweet it is.”
“The show is a little bit about that. There’s a little bit about what it was like to be in L.A. and what it’s like to be a Canadian,” he said. “America is the land of opportunity, where you take an orange off your tree in the morning and just eat it. Canada — you have to travel to go to Tim Hortons in the winter — but, it’s better for some reason.”
McCulloch said he hasn’t been to Medicine Hat since a car trip as a child with his drunk dad.
“It will be nice to be there on better terms.” He added he plans to continue to tour his one-man show in 2019, will maybe do a special, and he will return to work behind the camera on a new sketch troupe series for CBC.
Jones will hit the stage with her signature brand of gender-bending, side-splitting comedy straight from the depths of her mind, as Feb. 2 marks the first time she’s performed in the Hat.

Jones explained she doesn’t know McCulloch very well, but loves his work. “We were contemporaries. They were doing ‘The Kids in the Hall,’ while we were doing ‘Codco.’ Between us, we had a lot of respect for each other’s groups and for each other’s shows.”
No place in the world is like Canada, especially with a Canadian’s self-deprecating humour.

“Comedy comes from the challenges we have, the drawbacks we experience, and the dilemmas and conundrums we get in,” she said. “I’ve never played anywhere else, so I think they’re pretty good,” she joked.

According to Jones, with the movement towards better and equal treatment of women in entertainment, comedy is no exception.

“The times are changing to the point where no one’s going to get away with saying ‘women aren’t funny’ or judging them on their looks. It’s finally shifting,” she said. “You can feel — at least we’re past that.”

Jones has been doing the “fake news” show for 26 years and doesn’t know if this will be her last, but it’s got to be getting close, she added.

“When we started in the 1990s, we would cut pieces out of the newspaper and then we’d write about them. Then the Internet exploded and there’s so much going on,” she said, adding the show is still hot, especially online.

Moving forward, Jones joked she would like to have a whole other career in films — maybe as a beautiful grandmother-type. “I’m 63. I’ll be 64 in April.”

Don’t miss these national treasures — one night only! Show starts at 7:30 p.m. Tickets are $35.75 and are available to purchase online at tixx.ca.