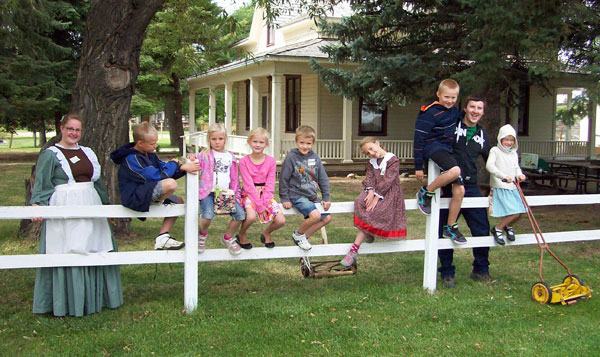 Village of Stirling Mayor Trevor Lewington noted the village recently received a letter from the Governor General of Canada Julie Payette congratulating the village on its 120th Anniversary.

“It’s quite the milestone anniversary — when you think 120 years,” he said.

Lewington said he imagines stepping off a train 120 years ago in what is now Stirling. “Unkept and untamed sort of grassland and thinking ‘I’m just going to park right here and build a community.’ It’s pretty amazing. You go from train stop flat field nothing to 120 years later and you’ve got this striving community that’s got a brand new refurbished school and solar panels.”

In the letter it was stated, “On May 5, 1899 settlers came to southern Alberta. They built a canal, transformed the arid ground into land that could be farmed, and started a new community. The village was born and it has been thriving ever since, for 120 years.”

According to the letter, one of the few existing examples of a Mormon agricultural village, Stirling was declared a National Historic Site of Canada in 1989.

“While proud of their heritage, the residents of Stirling have their eyes definitely turned toward the future, with one of the highest digital connectivity adoption rates for a rural community and a keen commitment to green energy,” it was stated in the letter.

Stirling is a historical treasure, Payette stated in the letter, but it is first and foremost a vibrant community. “Good luck on your goal to achieve ‘net zero’ on the energy needs of the municipality.”

Lewington noted the village will be celebrating its 120 years during summer events.

“I think we’ll do a couple of events. We always have Settler Days the third weekend in July. There will be some kind of commemorative and celebratory things added into that, is what I’m thinking. Our Recreation Committee is working on that still,” he said.

It’s also the Stirling Fire Department’s 60th Anniversary, Lewington added. There will be a steak dinner this Saturday at 6 p.m. at the Lion’s Hall Community Centre, which is also a fundraiser. It will also feature live entertainment. The cost is $40 per ticket or a table of eight for $280. For tickets contact Reanne at 403-634-6275. Lewington added four Stirling firefighters also took part in the Calgary stair climb this past weekend.

Lewington said the Stirling Historical Society’s Annual Community Yard Sale is being held May 25 from 9 a.m. to 4 p.m. “We get a fair bit of traffic out of that.”

Contact the Village of Stirling Office to register. Registration includes your address on the community yard sale map and advertisement of the event.

What the Junk is coming back to Stirling June 15, Lewington noted. The market runs 10 a.m. to 4 p.m. “They have a vintage market they tour around different locations. They historically have made a stop in Stirling every year. It’s at the Michelson Farmstead. They donate a portion of the proceeds back to the Historical Society.”

According to Lewington, Stirling residents also participated in the annual highway clean-up, which was held this past weekend. “Like many other communities around here,” he said. Participants were mostly youth from the area.