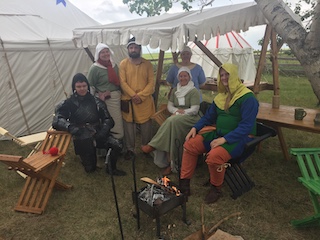 It was the 3rd Annual Windy Castle Medieval Faire this past weekend at its new location, just off Highway 4 at the corner of Township Road 74. Windy Castle’s mission is “to bring our community together for fun, food and fantasy — while experiencing a little medieval in our time.” In previous years, the faire was held at Coyote Flats Pioneer Village near Picture Butte.

“It’s been good. It’s right off the highway, so the visibility is awesome,” said Windy City President Juanita DeVos, this past Saturday during the faire. But the weather wasn’t co-operating throughout the weekend and the event’s annual pig roast feast had to to be cancelled.

“The rain has definitely not helped us at all, but it’s keeping the heat down. I know the first year we were at 36 degrees,” she added.

For the rest of the year, Windy Castle tries to put on fundraisers to help fund the faire. Fundraisers have included an Epic Dungeons and Dragons game and the murder mystery “Murder Under the Big Top.”

DeVos noted Windy Castle is always looking for more members, volunteers and board members too.

DeVos added the allure of a medieval faire is people trying to get in touch with their past. “This is a great way to do it.”

For more info visit the group’s Facebook page at facebook.com/WindyCastleMF/.

One of the guests at this year’s faire was the Lethbridge Medieval Club (LMC). The club is a non-profit society dedicated to exploring aspects of the human experience across the medieval world. Members learn, discuss and teach activities such as bardic arts, brewing, cooking, dancing, fibre arts, leather, metal working and martial techniques. Together, according to the club’s website, the club rebuilds small fragments of medieval culture through events such as feasts, camps and tournaments.

“I’ve actually been doing this close to 20 years now,” said Stacey Mackintosh from the LMC.

It was a hobby that started in costuming, she noted, which eventually resulted in having a full encampment. She added it basically started with finding certain aspects of medieval life kind of neat and then an interest in learning a couple of skills here and there. “Suddenly you’re swept up in reenactment.”

“It’s beautiful,” she said, adding the club visits other medieval faires and has its own private events, an annual winter feast and workshops. Becoming a member of the LMC, she said, is deciding to learn unique ages-old skills.

“I think in our world we have a lot of things that are instant and available to us at all times. And the idea you have to sit and potentially learn to make an item and truly appreciate it is something people are rediscovering,” she said.

Depending on the time of year, the club has a fluctuating membership of between 40 and 50 members, Mackintosh said. Members take part in encampments, sewing, dancing, weaving, archery and combat in the middle ages.