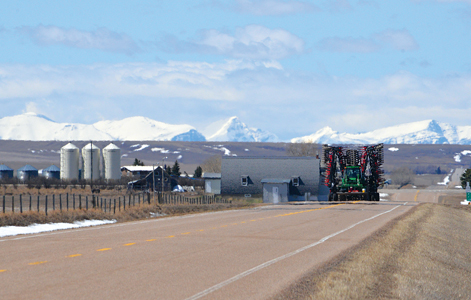 Not unlike other municipalities in the province, Cardston County is concerned about the rising cost of policing since the province moved to change the rural police funding model and hire 300 additional RCMP officers.

Announced in 2019, changes to the police funding model now require communities with a population of 5,000 or less to contribute to provincial policing costs, something they had not had to do in the past.

“Like everyone, we have this policing cost. We know that it’s not payable until next year, but we still have to add that and collect that as a tax from our ratepayers,” said Reeve Randy Bullock. “That’s a new tax that we are obligated to pay.”

Other criticisms of the provincial initiative have focused on the fact that there will be no guarantees that a specific municipality will see enhanced RCMP service or additional officers in their areas, despite being obligated to pay a new annual tax requisition.

“This year alone was just under $90,000. And it’s only going up,” said Bullock. “It goes up quite drastically over the next two or three years. Everybody is facing the same thing.”

Bullock didn’t have an exact figure for the added cost, but expects it to eventually top $250,000 annually. Another expected increase, a roughly four per cent rise in the provincial education tax announced in the 2020 provincial budget, has since been repealed to help citizens deal with the impact of the COVID-19 pandemic.

“We can appreciate the provincial government reneging on that education requisition. They recently announced that, and that’s a benefit we see right now during these unpredictable economic times.”

With the province’s uncertain economic position a stark reality in mid-2020, Bullock reports the county will be careful in planning for any major infrastructure projects this year.

“We’ve been kind of taking a cautious approach, based on these new things that have arisen with this pandemic. We’ve got our basic infrastructure program to make sure our roads are always in decent repair, but most of our bigger projects have been completed in the last couple of years, so we might take a break for a while and ride things out — we always question the money we have in reserves, and how we want to spend it properly, but I think we’re just going to take a cautious approach this year. We’ve got some road projects. Every project that we’re going to consider that’s in our budget for this year we’re going to review on a case-by-case basis, and that we proceed beneficially. Even though we’ve passed a budget, we’re still going to review on a case-by-case basis.”

Although sometimes easier said than done, Bullock hopes residents can stay positive and persevere as the light at the end of the tunnel begins to take shape.

“We’re optimistic. We understand this has taken everybody by surprise. Like all Albertans, I think we can recover from this. It’s going to take time to recover from it, but as long as everybody can still keep a smile on their face, make the best of the situation, and hope for the best, right? If you don’t have hope, you don’t really have much.”