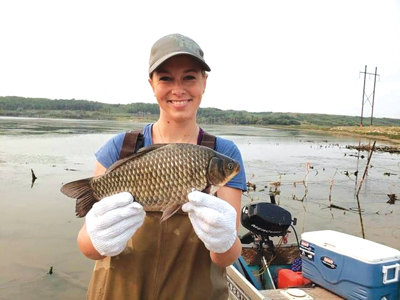 Shayna Hamilton, a Master of Science student in the Department of Biology at the University of Regina, holds a large mature Prussian carp. WWN PHOTO SUBMITTED

Efforts are continuing to track the spread of the invasive Prussian carp in the South Saskatchewan River basin through collaboration between researchers and citizens.

The Department of Biology at the University of Regina is conducting a study on Prussian carp in partnership with the Saskatchewan Wildlife Federation.

The goal of the research is to develop a better understanding of the distribution and abundance of Prussian carp in inter-provincial waterways.
Shayna Hamilton, a Master of Science student in the Biology department, is studying the ecology of Prussian carp. Her research includes field surveys of carp establishment and DNA barcoding for identification.

She said the citizen science project through the partnership with the Saskatchewan Wildlife Federation is very helpful to collect data about this invasive fish.

“The citizen science reports have made up a huge portion of our distribution data,” she noted. “They’ve also found reproduction sites that we didn’t know about that we’re going to be able to study further. They provide a lot of knowledge and this project definitely would not be near as strong without the citizens.”

Anglers and landowners have reported catches and sightings of Prussian carp to the project through a dedicated e-mail address.

“There are some native species that do look very similar to the Prussian carp,” she cautioned. “We just ask that people are really sure, because we also don’t want to be removing native species accidentally.”

Information can be e-mailed to: ReportInvasiveCarp@swf.sk.ca. Wherever possible a photo of the fish should be included to assist with the identification, and information should also be provided about the date of the catch or sighting and the location, preferably the GPS coordinates.

“We want to remind people that currently the provincial regulations (SK) state that you can’t waste any fish caught by angling, regardless of what species,” she said. “So if you’ve caught a Prussian carp, you can’t just toss it on the banks to rot. You have to use it in some way. They are edible, you can eat them. They actually don’t taste too terrible, they’re just pretty bony. Or if you caught a Prussian carp and you e-mail it in to us, then we can arrange to pick it up as part of our research program and then you’re not wasting it either.”

According to Hamilton there has been a growing number of citizen science reports this year that provided even more data for her research.

“This year has been absolutely fantastic for citizen science reports,” she said. “We have officially got more confirmed reports just from May until now as we did all of last year. So that’s absolutely wonderful. People are definitely getting the word out there and we’re getting the data back, which is giving us a better understanding of things.”

She felt the growing number of reports about Prussian carp might be the result of more awareness about this invasive species and probably also an indication of their spread in the South Saskatchewan River basin.

“Last year was our first year of this program,” she said. “Prussian carp was still very new to everyone. So we’ve done a lot of outreach and presentations and Facebook posts to try and educate and to just get the word out and make people aware. I think this being our second year of our program, just more people know about it and know to report. The second thing is that potentially there could also be more Prussian carp, just because it’s another year. Their populations are most likely increasing and so there could just be more available to be caught.”

Prussian carp is an invasive species from Asia. It was introduced to Alberta, from where it spread into Saskatchewan through the South Saskatchewan River system.

“They have gotten past the Gardiner Dam and they’ve also been reported past the weir in Saskatoon,” she mentioned.

The ongoing downstream spread of Prussian carp is a concern, and another worry is the potential impact of this invasive species if it gets into the Qu’Appelle River system.

“It would be more ideal habitat than the South Saskatchewan River system that they’re in right now,” she said. “So we would expect to see them being much more invasive and also have a much bigger impact in that system, if they were to get in.”

Lake Diefenbaker and other water systems with deep, clear water without a lot of algae do not provide an ideal habitat for Prussian carp.

“We know that in places that have shallow water bodies, that are very productive, that they take over quite quickly,” she said. “Their ideal habitat is shallow water that’s very eutrophic, have a lot of algae and vegetation, and less than 30 feet depth range.”

There have been no confirmed reports of Prussian carp in the Qu’Appelle river system and for now the Qu’Appelle River Dam is acting as a control barrier.

“So we’re looking into making sure we can minimize any potential further spread, and then for the areas that already have established populations just trying to learn more about what they’re doing in that system and to just increase education of the public so that we get better information and better data from our citizens,” she said.

It is very difficult, if not almost impossible, to eradicate an invasive fish species once it is in a water system. The first priority should therefore always be to keep an invasive species out of an aquatic ecosystem.

“So what we often look at instead is a lot of monitoring to see where populations are exploding versus where they may just be petering out into some sort of natural balance,” she said. “And then if there is any sort of impact happening to the native species, it then turns into a management strategy where you try to minimize the population through a variety of different management techniques to minimize the impact, but it’s very unlikely that you will get rid of them entirely.”

The Prussian carp presents a formidable challenge for various reasons.

They are considered to be a generalist species that can eat a wide range of food options.

They can survive in a large variety of environmental and water conditions.

They can also reproduce at a prolific rate. They can spawn three to four times a year and females can lay up to 200,000 eggs per spawn.

In addition, the females are able to reproduce without males through a technique called gynogenesis.

“They use sperm of other species in the area to promote the development of their eggs, but all of the offspring are cloned,” she said. “So you can imagine that a fish that can reproduce four times a year by itself while stealing other species’ sperm can make quite an impact in the population. So essentially the main concerns are that they’re going to outcompete the native species that occupy similar ecosystems to them and that could crash the native population.”