Finishing off in style 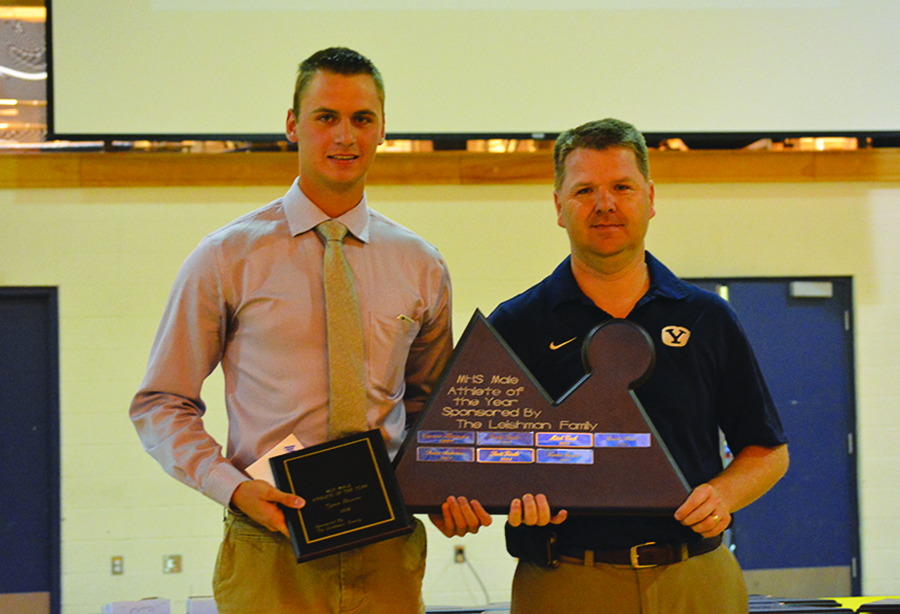 Tyson Bourne receiving the MHS Male Athlete of the Year award with Principal Rob Doig at the Blue and Gold 2016 All Out Awards last Thursday night inside the Tom Karren Gymnasium. Bourne played baseball, volleyball and basketball.

A stand out athlete is saying goodbye to high school, but not before bringing home some significant hardware while wrapping up a successful career.

Tyson Bourne, senior at Magrath High School, is the winner of multiple awards including being named Male Athlete of the Year at the Blue and Gold 2016 All Out Award ceremony last Thursday night.

During his tenure, Bourne played on the baseball, basketball and volleyball teams.

Being honoured with Athlete of the Year is something he says he will never forget.

“It feels good, it’s a huge honour sharing it with the all the people who have won it before,” said Bourne.

Bourne put a lot of hours and hard work into being the best athlete he could be and is grateful for his accomplishments, but he hands a lot of the credit over to his teammates.

“I love my teammates, they make the games great. Without their support I wouldn’t have got this,” said Bourne.

Shane Orr was Bourne’s volleyball coach throughout his career and has really seen him grow into the person he is today.

“He developed as the years went by, he had times when we was faced with adversity and he handle it very well and grew in those moments. It was fun to see him progress like that,” said Orr.

Orr also recognized his potential as a leader.

“He’s a team player and was one of the leaders on our team in volleyball. He was able to be led and I think that’s a really good quality of a team leader, someone who can take instruction as well as give it,” said Orr.

Bourne extends his gratitude back to the coaches who worked with him along the way.

“They were awesome, they were really good to me, knew what they were doing and it was really fun,” said Bourne.

On top of being a leader Orr felt Bourne got along well his teammates and was sometimes the guy who kept everybody close.

As for what’s next, Bourne recently received the news that he will be serving his mission in London, England.

Something he admits makes him a little nervous, but at the same time really excited. His departure date is set for August 17.