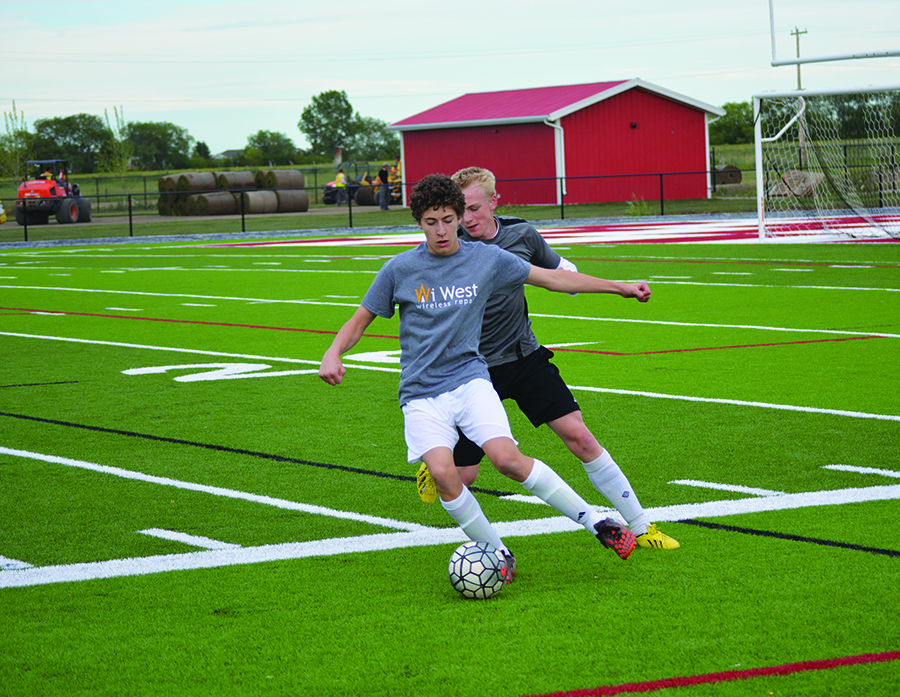 Forward Brad Johnson of the RaymondÕs U18 soccer team, who will be participating in the Southern Alberta Summer Games next month in Lethbridge, holding off a defender at Victoria Sports Park last Friday night.

A Raymond soccer team plans on kicking down doors and are ready to make some noise next month when the team travels to the windy city for some serious competition.

The U18 soccer team will be competing at the Southern Alberta Summer Games that take place from July 6-9 in Lethbridge.

James Hemming is one of the two coaches of the team and expects big things this time around.

“Every year the expectation is to go into the summer games and win gold. The age group that we have this year is the group we won with two years ago in Pincher Creek. We are hoping to match that this year,” said Hemming.

Last year the U16 earned a silver medal while the U18 placed fourth.

This year, the team’s expectations are much higher.

Forward Brad Johnson believes the team they have this year is up for the challenge.

“I think we’re going to do great. We have a lot of talent on our team and we’ve got great chemistry. We’ve been playing together for so long and I know we will go out there and try our best,” said Johnson.

Playing together for many years has Johnson believing they can win a gold medal and says the coaches have made this team that much better.

“The coaches are fun to be around and they’re good coaches. They know the fundamentals of the game and are just great guys,” said Johnson.

To raise money for their trips to Lethbridge the team is doing a bottle drive for the second year in a row.

The money they receive will help with the costs of uniforms, drinks and snacks.

Last year the bottle drive raised just over $2000 and Hemming believes the community will once again rally behind the team and show their support.

Some in the community have already started to show their commitment to helping out.

“This year we have a player who is working at Subway and the owners has said he can take all the bottles from them for the next couple of weeks to go toward the bottle drive. People in this community are great,” said Hemming.

Hemming adds a bottle drive put on by the athletes is a great learning experience as well.

“We wants these kids to work for their uniforms and we want them to do the fundraising. We like to see them put in the effort to make things work out instead of us just giving it to them. It’s a good teaching moment for them,” said Hemming.