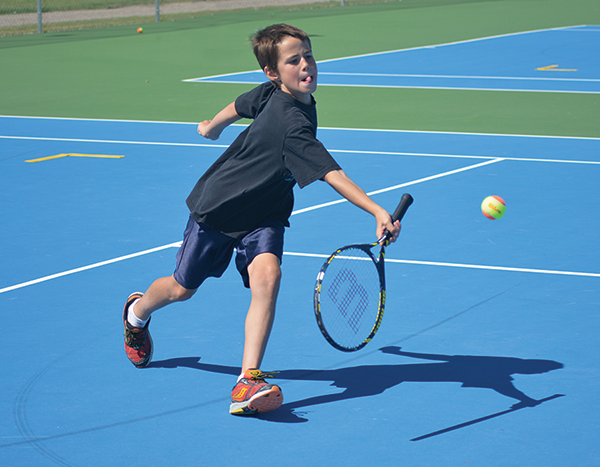 The tennis courts in Raymond were “racking” this weekend as some of the towns youngest tennis players battled it out in some friendly competition.

The Rogers Rookie Tennis Tournament took place last Friday morning as U8, U10, and U12 coeds competed in a series of matches for prizes and placement.

The kids were at the beginner level, but in the last couple of weeks Tessa Wilde, president of the tennis club in Raymond, says they have shown a lot of improvement and this tournament was meant to encourage them going forward.

“It gives them something good to do. It’s something wholesome, it’s fun and it’s exercise. You just run,” laughed Wilde.

Parent, Karen Salmon, agrees with Wilde, and says her kids have really enjoyed the sport and the tournament adds to that.

“It’s been good. It’s fun, but it gives them a competitive experience without all the pressure of it. Everyone comes home smiling,” said Karen.

She adds Wilde has been really great with the kids and is such a great teacher.

“She’s amazing. She’s been very accommodating to every skill level and every need. I have one daughter with special needs and she has been amazing with her. She makes her feel like a million dollars and a superstar,” smiled Karen.

Karen’s son Brett, was the winner for U12 and says tennis has been really fun for him and winning the tournament felt great.

“It felt pretty awesome. Competition was hard. Most of them were older than me, but I had a lot of fun,” said Brett.

Wilde has also been teaching the kids tennis etiquette, which she believes will benefit them later in life.

“Tennis is such a polite game. Your opponent is always right,” laughed Wilde.“It teaches them to get along and the importance of taking turns. That’s huge because those are life lessons.”

Organizing these types of events can be a lot of work and Wilde is so grateful to have people in the community who give their time to help out.

“I always have two or three volunteers that come and help the kids because the kids are still learning. So they help keep score and act as the umpire,” said Wilde.

She was also very appreciative of all the sponsors who supplied the prizes for the competitors.

The tournament was sponsored by Rogers Communications, as part of the Roger Rookie Tour.

Fours years ago, Wilde connected with Tennis Canada, who then put her in contact with Rogers.

The Raymond Tennis Club is currently in its fourth year.