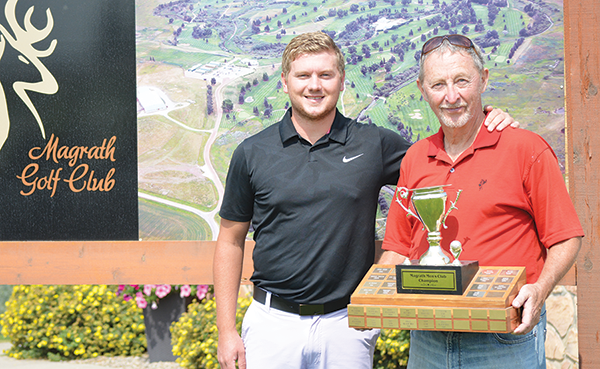 There was no lack of swinging clubs last weekend as athletes did their best to shoot a good round in with some friendly competition.

It was a beautiful day last Saturday as the Magrath Golf Club held their 2016 Club Championship.

The event is used to drawing in a good amount of people over the years and this year was no different.

“We had 40-42 players out there. It was a good showing, everybody seemed to be enjoying it. The weather held up as well, so we were happy about that,” said Ryan Goodridge, Head Golf Professional.

They weren’t the only people who were happy.

Alan Bourne shot 76, which is only four strokes over par.

The score was good enough to land him first place in men’s and he was pleased with how he played.

“I was with some long hitters so I knew better to challenge them. I just tried to hit on the fairway, hit it on the green and was fortunate enough to make the shots I needed to for par. I must have made about six one-putt on the green,” said Bourne.

Goodridge is a Toronto native and is in his first year as Magrath’s Head Golf Professional. He says it was great to see everybody out taking part in the event.

“We had a huge amount of support from the majority of our members and even the members who weren’t able to make it out have been very supportive of our club,” said Goodridge.

Bourne has been a club member for a very long time and is impressed at how things have gone this year.

“They are running the place very well. They’re organized and thorough, which I like. I think they are doing an excellent job,” said Bourne.

Goodridge says it’s been a great season so far, especially with all the changes the club went through.

“It’s been a transition year for us with losing the old club pro and me coming in. We’ve lost some members, and gained some new ones so everything has been running pretty smoothly,” said Goodridge.

Coming from a big city like Toronto to a small town like Magrath is a huge change for Goodridge, but says he has really enjoyed being a part of the community.

“It’s a little slower pace, but I’m enjoying it a lot. There are very nice people here and everyone has welcomed me with open arms,” said Goodridge.