Former Comet making a name for himself in the ring 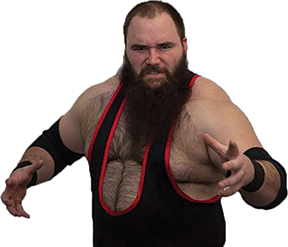 From the rigs to the ring, a former Raymond High School football stand out is making quite the name for himself in the local wrestling scene.

Brad Kiss, better known as the Primate Silverback of Pure Power Wrestling, has spent four years with the organization and is quickly moving up the ladder.

Kiss is a two time PPW Heavyweight Champion. A feat he is extremely proud of.

“You need to be recognized for the hard work you put in before they (PPW) start to give you a push. So for PPW to give me that opportunity was great. It was nice to be acknowledged and it was definitely a nice thank you,” said Kiss.

Kiss spent time working as a roughneck on a drilling rig. On his way home for spring break up, he heard through the radio that PPW were looking for wrestlers.

In that moment Kiss thought it was something he could succeed in.

“I felt like I could probably do that, it would give me a reason to stay in the gym and stay active. I contacted the guys and was training in about two weeks after that,” said Kiss.

Having never wrestled before joining the organization, Kiss says there was a big learning curve, but the people around him have made the transition a little easier.

“You’re learning new things, you are putting your body through things it has never been through before. Everyone is fairly patient and understanding so it makes it easier,” said Kiss.

Being a wrestler requires Kiss to spend a lot of the time in the gym and it’s something that drives him to be  better.

“There’s a lot of physical hurdles, you try to stay in the gym as much as you can along with working full time. I’m in the gym about three times a week. My goal has always been five days, but life has a way of giving you days off,” laughed Kiss.

Kiss is a power wrestler and specializes in power moves, a role he has really embraced.

“Brutish is a good way to put it. It’s very much a strong and powerful style. I don’t need to run around or do flips. I can just lay in a couple of shots, pick the guy up so everybody can see and throw them down,” said Kiss.

Spending years on the football field, Kiss has experienced being in front a big crowd, but the feeling he gets being in the ring with all eyes on him is something that has really surprised him.

“The first match I had was such a rush. All eyes were on me. I was out there for five minutes and it felt like twenty. You’re working the crowd, you get them cheering and you get them booing. It doesn’t sink in until you get back stage,” said Kiss.

There is often a social stigma surrounding entertainment wrestling in that it’s fake. Kiss will be the first person to tell you it’s most definitely not.

“I was in a match in Moose Jaw and the guy went to throw me out of the ring and he whipped me around so hard that I spun like a helicopter out of the ring and shattered my foot. I had to wrestle the rest of that match and the match the next night. That’s not fake,” said Kiss.

Kiss’s last match was against fellow wrestler Bulldog MacBain which saw Kiss not only get cheated out of his match, but had his beard cut off by Kyle Sebastian in a surprising attack.

The next event for PPW will take place at the legion in Taber on September 16. Until then the question remains, will the Primate Silverback avenge the beard against Kyle Sebastian?