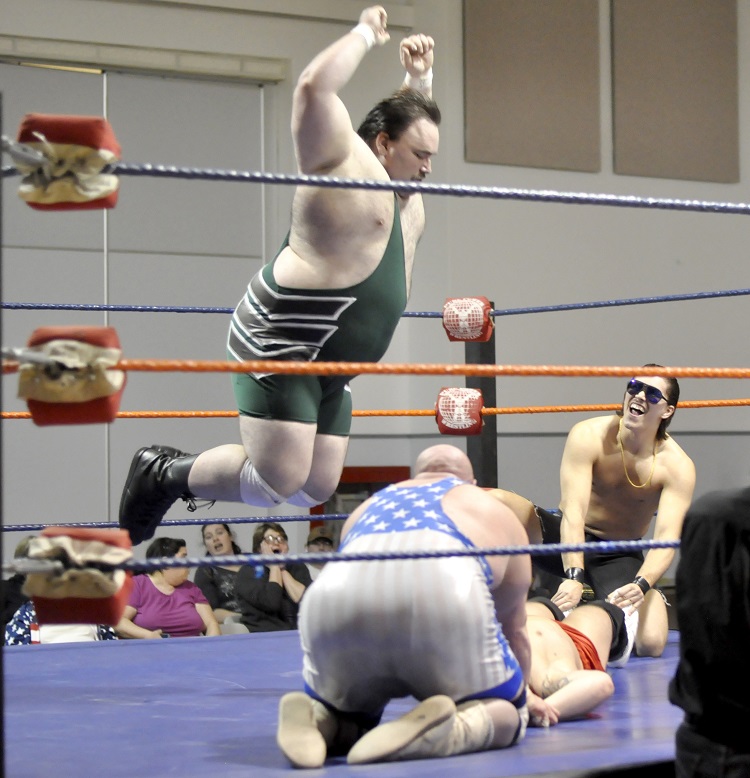 It was a wild ride for fans of Pure Power Wrestling during their Wildside event last week.

The event, which saw the tag-team main event of the evening balloon into an eight-man tag match, an appearance by local boxing legend Rick Duff, and more questions and answers when it comes to what is going on between Chris Perish and the Irishman, left fans screaming in their seats.

The tag team main event between “The Tattooed Terminator” Massive Damage and the Irishman against the Adult Social Society had so much interference that management had no choice but to turn it into an eight man tag with the addition of Perish, “The All-American” Steve Rivers, “The Real Deal” Sydney Steele and “Wildchild” Tyler James. The match quickly spilled out of the ring, but eventually The Irishman was able to pin Perish for the win.

Afterward, Perish pointed fingers at PPW management for the loss.

“That wasn’t a match,” he said. “That was, again, PPW deciding that whenever it suits the good guys, they’ll do something. But when things are there that could help us, they’re not around.

“Why can’t I get a title shot around here?” he asked. “Why can’t I ever seem to get what I want around here, but guys like Sydney Steele, Tyler James, and the Irishman get to do whatever they want?”

Irish said he does not know why Perish has taken issue with him.

“Im out there minding my own business (in January), I’m in a match for the number one contender, he comes out costs me the match, and I have no idea why,” he said. “Next thing I know, I’m being asked questions by the PPW powers-that-be, and (Perish) jumps me again.”

Perish refused to give a reason for attacking Irishman, stating he would do so when he was ready.

“My time is the time that counts,” he said. “I will let everyone know when I feel ready.”

“The only thing I have to say is Irish, tell everyone exactly who you are before I do. If you don’t, I will. And believe me, you don’t want me to.”

“My life is an open book,” Irish said. “I am me. You want to know something about me? Check out my (social media). My life is on there everywhere.”

The opening match of the evening saw Rivers take on Steele. In spite of interference from the Adult Social Society, Steele managed to roll up Rivers for the pin. Afterward, the three men attacked Steele.

Perish took on Kid Cyrus in a match that saw Cyrus suffer from a wardrobe malfunction after Perish undid the laces on the mask Cyrus wears. K.C. spent the rest of the match trying to battle Perish and keep his identity a secret. Eventually, it proved too much and Perish was able to beat the masked flyer.

Afterward, Rivers attacked Cyrus, and then told the crowd he was going to clean up wrestling in Lethbridge just like U.S. President Donald Trump was cleaning up America.

“Do you know why (Kid Cyrus) wears a mask?” Rivers asked. “It’s because he’s illegal! He is taking jobs from good, honest, American wrestlers up here in Canada! That’s why he’s hiding his face, and that’s why I’m putting him out of wrestling!”

Rivers vowed he would continue his attack on wrestlers he deems “illegal” until PPW has been thoroughly cleaned up.

Travis “The Heat” Copeland battled Cyanide in a rematch that doubled as an opportunity for Copeland to earn a permanent spot on the PPW roster. To battle the constant interference from Cyanide’s manager, “The Black Heart” Vinnie Valentine, Commissioner Bulldog MacBain brought out local boxing legend Rick Duff to keep an eye on things outside the ring.

The match ended when Copeland hit Cyanide with a huge frog splash from the top rope, while outside, Valentine was beaten senseless by Duff. Cyanide then made the mistake of calling Duff into the ring, where he was promptly put out by a stiff shot to the head.

Next month’s PPW event, “The Last Stand,” is scheduled for March 18 at the Fritz Sick Centre.