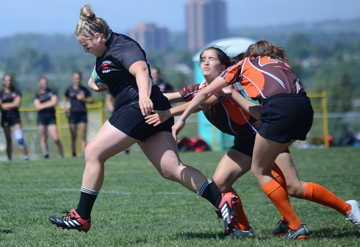 The Raymond Comets senior girls rugby team is on top of the provincial landscape.
Raymond capped off an undefeated 2018 season with a 31-10 win in the provincial final over Calgary’s Notre Dame. It was a surprise final, as the No. 7 ranked Notre Dame squad defeated perennial powers Bev Facey and Western Canada, en route to the final.
“To see them knock off Bev Facey 47-0, I knew they were serious,” said Raymond coach Dan Bikman, of the Notre Dame team that eventually gave his squad a tough match in the championship game. “It was a really good team – better than I expected to see.”
The teams played to a 7-7 draw for most of the first half, despite a quick start from the Comets.
“We scored and they scored right after,” said Bikman, as Notre Dame was the first team to score on Raymond all season long.
A Comets score late in the first half gave Raymond a boost, but Notre dame held tough.
“They were big, fast, strong and I think they knew our style, because the way they played defence on us was pretty effective.”
In the second half, however, it was the Raymond defence that stood tall, as Notre Dame increased the pressure, minute by minute.
“They had possession 60 per cent of the game,” said Bikman. “We just took advantage of our opportunities, and played with a lot of unity and grit. The other team did move the ball on us and had a lot of possession.”
He added his players made the tackles that needed to be made, however, as the Comets limited Notre Dame’s offence to a three-point penalty kick in the second half. Raymond built a 24-10 lead, on a strength of a number of lengthy scoring plays, and scored again late to seal the deal.
Top-ranked Raymond earned a championship berth with two convincing wins, which began with a 58-0 drubbing of St. Francis on Friday morning.
“It wasn’t a great game for us,” said Bikman. “Our kids weren’t as mentally prepared as they needed to be, but they played fine.”
The Comets scored early and often in the semifinal, a 70-0 win over McNally on Friday afternoon, as the team’s offence fired on all cylinders.
“Our outside speed took over,” said Bikman, whose team cruised into Saturday’s final with a ton of momentum.
And for a team that went into the championship with a perfect record, and a perfect defence, Bikman added Saturday’s competitive final made the gold medal even sweeter.
“That game was rewarding because they had to dig deep as a group, and those games are the most rewarding.”
Raymond will graduate 12 players from the senior varsity roster, with another 12 eligible to return.
“They are some openings in the starting line up,” said Bikman, who added the 2019 version of the Comets will once again be a force to reckon with, as the program is in fine shape moving forward.
As the 2018 season comes to a close, the coach looked back on what was one of the best rugby campaigns Raymond has ever witnessed.
“It was an ideal season. The team dynamic was awesome, and they were what a team should be on and off the field. I was grateful to be their coach.”
Raymond’s championship roster included Abby Jensen, Breanne Jensen, Cassi Dainard, Claire Romeril, Ellie Wilde, Emily Atwood, Gracie Nelson, Gracie Heggie, Haely Lamontagne, Halli Baker, Hanna Barfuss, Ivy Jensen, Jade Nelson, Kansas Long, Katie Hill, Kendra Cahoon, Kora Schmale, Lucy Wilde, Lyvia Jensen, Madi Miller, Madison Galbraith, Olivia Allred, Sabrina Steffenson and Sadie Nelson.
Coaches for the 2018 were Dan Bikman and Noel Smith.