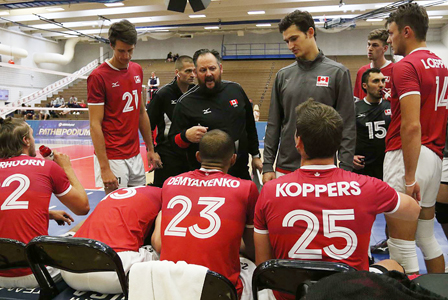 A familiar face in Magrath has been named the head coach of Canada’s Men’s Junior National Volleyball Team.

Ryan Marsden, who lived in Magrath until he was 10 years old, has been coming back to southern Alberta every summer to run camps for youngsters in the community.

“I have been running Center Court Volleyball Camps in Magrath for 17 years now,” said Marsden. “I have never missed a year. They have been a four-day camp spanning from Monday-Thursday for grades 7-9 and grades 10-12.”

The camps have evolved over the years, as Marsden added the hope is the camps have had a positive impact on the Magrath High School Pandas and Zeniths programs.

“I have watched the camp grow in popularity from its beginning and as a result, the programs at MHS have become stronger and stronger,” he said. “I love southern Alberta. I carry a piece of Magrath in my heart.”

He added the camps give him a chance to connect with a number of people he grew up with.

“Many of these kids that attend the camp are kids of my friends that I had growing up. To be able to go back to Magrath and give back what I have learned from coaching has always been very important to me, and has been a priority to me and my family.”

With that in mind, the camp in Magrath is always a special one for Marsden.

“Over those 17 years, I have often been coaching teams in the summer, whether it be provincial or national-level teams. I have always juggled my schedule to ensure that I didn’t let down the citizens of Magrath and surrounding areas.”

Some notable athletes have come through the camps and went onto play at the post-secondary level, including Scott Gieske (MRU), Carson Heninger (MRU, BYU) and Carter Hansen (LC).

After he wrapped up his playing days in high school, and served his LDS mission in Salt Lake City, Marsden began his post-secondary playing days at NAIT in Edmonton.

“After injuries ended my post-secondary career as a player, I turned to coaching, as I just couldn’t give up my love for the game,” said Marsden. “My first coaching job was at my alma mater, Salisbury Composite Sabres, coaching the senior boys. I started a club called PARK Volleyball Club as well.”

After three years of coaching at this level and also coaching club volleyball, he took his first post-secondary job at University College of the Cariboo (now known as Thompson Rivers University) in Kamloops, B.C. From there, Marsden made his way to Mount Royal in Calgary. His coaching journey continued at the U of A as an assistant coach with the Golden Bears, before Marsden returned to Calgary as the head coach of the SAIT Trojans.

“During all of this, I also coached some club volleyball as wel,l where we won provincial and national titles with Canuck Stuff YQM,” he said. “At SAIT, we won our first ACAC Championship in 25 years and also achieved a CCAA Silver medal at nationals.”

Today, Marsden has just completed his second full season at Olds College. Last year, he coached both the men and the women at the college.

“The previous year, before I got there, both teams went 0-24. Last year, the women won two matches and the guys still went winless,” he said. “There was a massive cultural shift that needed to happen, which was arguably my biggest challenge as a post-secondary coach. We started on the right path.”

This year, Marsden coached just the men, which was the original plan.

“This year, we went 6-18 and had the winningest season in program history. This year we were awarded a league all-star in Thundersky Walkingbear and I also received the leagues ACAC Coach of the Year award.”

Marsden also served as an assistant coach of the senior “B” team for Volleyball Canada in 2007, where the team represented Canada at the FISU Games in Bangkok, Thailand.

“We won a silver medal, losing to Egypt in the final, but taking down Germany in the quarterfinals and the favourite Italy in the semifinals. Last summer, I started the summer as an assistant coach with the “B” team again and finished it as the head coach.”

As an assistant, Marsden’s team ventured to a tourney in Colima, Mexico and when he was the head coach,the competition was called the Pan Am Cup in Colorado Springs, Colorado. There, the team won a bronze medal.

In terms his current role as head coach of the junior national team, Marsden is fired up and ready to go.

“It is a great honour to have those at Volleyball Canada trust me with this group,” he said. “The junior team will be made up of the best young men born in 2001 and 2002 from our country.”

The team was set to train in Gatineau. Quebec, and originally had competitions in May in Edmonton (NORCECA Championships) and in September in Colorado Springs (PAN AM CUP), before the COVID-19 pandemic struck.

“This is the group that will start their journey in hopes of eventually qualifying for the 2028 Paris Olympics,” said Marsden. “That is a long ways off, but hopefully that is a part of their journey. We hope this summer to qualify for World Championships that will take place in the summer of 2021 in a location to be determined. Most of our talent will come from first-year, post-secondary players across the country.”