Canadian multi-faceted musician Phil X is no stranger to the rock and roll world! The Toronto-born artist has been a ‘hired gun’and/or session guitarist and has performed on tour, working alongside some of the best in the business, including Alice Cooper and Chris Cornell. He also leads the three-piece ensemble Phil X and The Drills, has a popular YouTube channel, has created his very own app and is the guitarist for one of the biggest names in rock, Bon Jovi.

Bon Jovi headlines Encore Drive-In Nights on the big screen in Raymond and throughout North America May 22. During the pandemic, Phil said he’s been doing a lot of session work, “which is great.”

When the pandemic began last March and lockdowns and restrictions became common place, Phil said like everyone else, he was scared. “I didn’t know what was going on.”

But in June, Phil pointed out, people started actually making music again. “I started doing sessions and if I wasn’t in town, I could do the session remotely.”

“That kind of kept me afloat, which I’m very grateful for.”

In the meantime, Phil added, The Drills had put out a couple of singles and Bon Jovi put out a whole record last fall entitled “2020.”

“There was a lot of stuff going on, but how do you put out a record when you can’t tour to promote it?” “I’ve seen both sides of the coin.

One being, the bar band that does 100-200 theatres, shares hotel rooms and travels in a van. And then on the other side of the coin, I have a band that plays arenas and stadiums, flies in jets and both realities are affected by this whole COVID thing. It’s a crazy, crazy time,” Phil said.

At the beginning of the pandemic, Phil said, he created a YouTube channel before the session work started up again — when he was “scrambling and trying to figure out” a new life.

“I started posting more stuff on YouTube. I tried to do two to three videos a week and I watched my subscribers grow when I was doing that. Then when I got busy with sessions, I couldn’t put up videos anymore. Then bang, the growth stops in its tracks and now you’re too busy to do content. It’s a catch-22. What do you want to do? Do I want to do sessions or do I want to do YouTube?” According to Phil, the YouTube content featured covers and guitar parts he recorded with various artists, including Cooper, Cornell and Daughtry. As for the session work, Phil said, he remains busy. “Recording at home is another thing that’s pretty amazing.”

There were sessions where he had to venture out to a studio and everybody had masks on and had to sanitize their hands after touching everything. “It’s a very different experience.”

“But recording at home is pretty amazing because you can go have lunch with the kids, I can check in on my son doing Zoom and then the kids say ‘daddy, dinner’s ready,’so there’s an endearment to it and then I can still get work done,” Phil said. “I’m pretty happy with that happening right now.”

It seems like 2022 might be the year when live music makes a triumphant and highly-anticipated return and Phil said there’s a couple of things in the works moving forward.

“Bon Jovi has talked about heading out for some dates. I think it will be broken up throughout the year. I don’t think it will be a long tour or anything like that. It will be like maybe five dates in this part of the world and then maybe a month down the road there might be like three weeks here or there. It’s still kind of up in the air, but everybody does want to get back to work and only if it’s doable with the bylaws and regulations of what’s happening with COVID at the time,” Phil said.

“The Drills are on the calendar somewhere opening up for Skid Row in Europe next year, so we’ll see if that happens. It’s just a lot of stuff. Nobody wants to go out if the world is not ready.”

While the world waits to attend inperson live events and bands remain eager to get back out on the road, virtual concerts and online events continue to entertain the masses.

“I guess people really want to see something. You’d think it’s the artists that really miss playing, but I think the fans miss it more. Especially since I know, since becoming a part of Bon Jovi, I’ve seen super fans that go to anywhere between 100-300 shows. That really means a lot to the artist. Think of the investment. ‘They’re playing 50 shows and I’m going to go to 30.’That’s 30 tickets, 30 VIP packages, 30 flights, 30 hotel rooms and the list goes on. You’ve got to eat and you need to travel,” Phil said. “But, at the same time, it’s quite a scene when you’re on the other side of that. It’s exciting.”

Last year, Phil also explored and released the official Phil X app, where he creates live weekly chats and it’s a platform where anything goes.

“I do tons of requests. I play Drills, I even play a couple of Bon Jovi solos I do in the show, I do AC/DC, Zeppelin, I’ll play almost anything. There’s also aQ & A and there’s also a storytelling time. I do a lot of that. And I ask some questions. I ask the fans how they feel about drive-ins and how they feel about fraction capacity shows. The consensus is usually more towards — it’s better than nothing.”

Right now, Phil said, The Drills have a new single out called “‘I Love You’On Her Lips.” Check out the new single on Spotify and through other online stores and streaming/downloading services. Also, Phil is featured on the rock-doc “Hired Gun” — currently streaming on Amazon Prime Video.

Tickets are on sale now for Encore Drive-In Nights with Bon Jovi. General Admission $115 and VIP $239. Ticket prices are per vehicle and for up to six people. Strict COVID guidelines will be in effect. Gate opens at 7 p.m. Show starts at 9 p.m.

As of May 3, the drive-in show is about 75 per cent sold out, according to Town of Raymond Director of Community Development and Human Resources Greg Robinson.

“We recognize the impact COVID is having.” However, these events conform to current Alberta Health COVID guidelines. “We are looking forward to the summer and the public can expect several more shows equally stellar to Bon Jovi. We will announce our June 12 artist at the Bon Jovi concert, so stay tuned,” said Robinson. 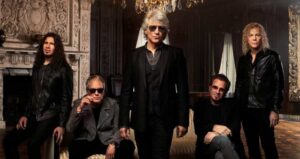